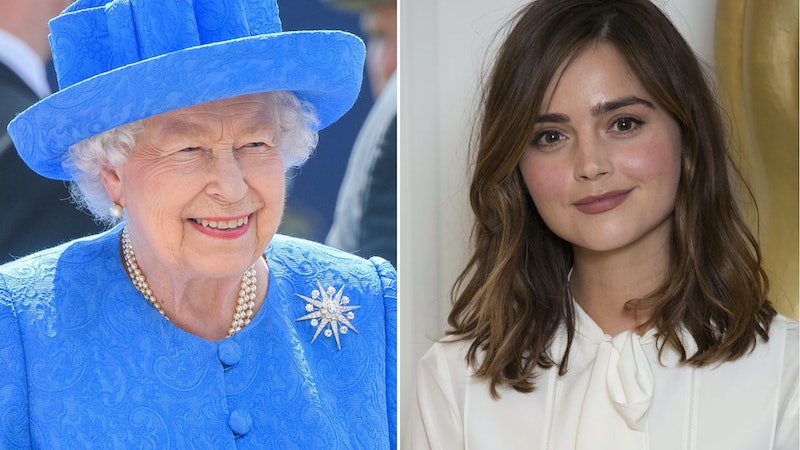 This Sunday (June 16) marked the final of the Cartier Queen's Cup Windsor, which is "one of the most anticipated polo-related event[s] of the year," as the Daily Mail reports. It's also a place where royals and celebs get a chance to catch up and mingle, including an actor who is currently portraying Queen Victoria. Whether this role was discussed is another matter, but the Queen met Jenna Coleman and boy was it a sight to see.

Wearing a floral, Erdem-designed sequinned blouse and pencil skirt, Coleman could be seen smiling and interacting with the Queen before taking her seat a few rows ahead in the royal box. If you want to replicate this chic look (and have the money to do so), you can order both parts of the actor's outfit on Erdem's website. While the blouse is currently out of stock, the £505 skirt is available. Coleman was also accompanied by Poldark's Emilia Tomlinson, who wore a sleek Victoria Beckham outfit, as the Daily Mail reports.

Sunday's outing marked Coleman's third meeting with the Queen, with her first in 2013 during the opening of the new BBC television building. Coleman told Forbes that she told the Queen that she worked on Doctor Who, the Queen replied: "to travel through time and space must be fun." So precious. Coleman then met her majesty at another polo match which helped her form her portrayal of the Queen's great-great-grandmother, and how Victoria would have met people.

"What was most interesting and helpful was how people responded to her, the silence," she said. "The Queen's presence was completely the opposite of what it would have been for Elvis Presley or One Direction. There was hushed silence, it was calm, respectful." She added:

"It helped me understand how the scenes work, how to play power, how to play the Queen. When you have power, you don't need to project it. If you push it, it won't work."

Obviously, the times that Coleman has met the Queen, there's a limited window of conversation, so whether or not they discussed her portrayal of Victoria will remain a mystery until Coleman mentions it. But, that's not to say that the Queen isn't familiar with the ITV series, as creator Daisy Goodwin told the Daily Star (via the Mirror) in 2016. "I know someone who is a very old friend of the Queen's and I was told that the royal family is enjoying it hugely," she said. "Whether that means the Queen is enjoying it, I don't know. But I know that other people in her circles are enjoying it."

Victoria wouldn't be the first show depicting the royal family that the Queen may be a fan of, as it has been reported that the royals are also avid watchers of Netflix's The Crown. As a royal source told the Express, the Queen has reportedly "watched all 10 episodes of the [first] series, having been encouraged to do so by her son and daughter-in-law, the Earl and Countess of Wessex, who arranged for Saturday night viewing sessions in the sovereign's private apartments at Windsor Castle."

Either way, I'm sure the royals are excited for the next instalments of each show, with the third series of The Crown currently filming and the fourth series of Victoria being written as of May 2019.