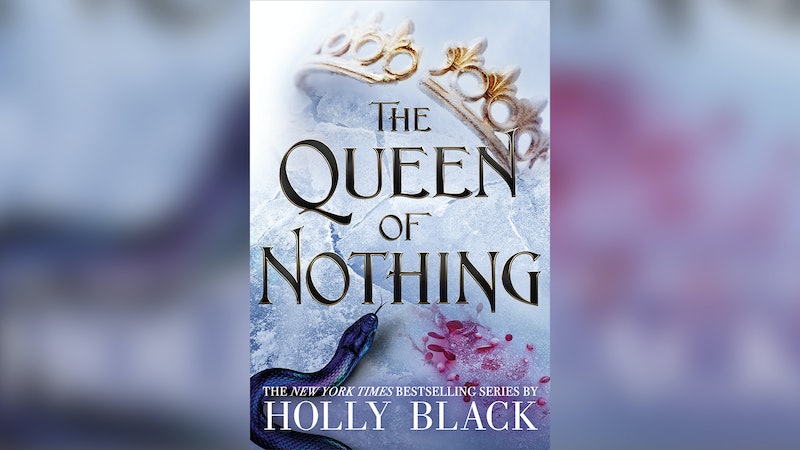 Soon, readers will know once and for all who will be the true ruler of the High Court of Faerie, with the release of The Queen of Nothing, the third and final book in Holly Black's YA fantasy series The Cruel Prince. Bustle has an exclusive first look at the cover below, plus an excerpt from the heart-stopping new book.

UPDATE: Little, Brown Books for Young Readers tells Bustle in an email that the publication date for The Queen of Nothing has been moved from Jan. 7, 2020 to Nov. 19, 2019.

"I am so excited to be revealing the gorgeous cover to The Queen of Nothing," Holly Black tells Bustle. "I can’t wait for readers to discover all the twists and turns and surprises ahead.”

If you haven't yet lost yourself if the lush fantasy world of Black's The Cruel Prince, here's what you've missed: Jude was just seven years old when her parents were murdered and she and her two sisters were stolen away to live in the Faerie world. Ten years later, Jude wants nothing more than to belong there, despite her mortality. But many of the fey despise humans, especially Prince Cardan, the youngest son of the High King. But to win a place at the Court, Jude must defy him — and face the consequences.

But after two books of palace intrigue, some serious family drama, skilled spies, personal betrayals, threats of war, and one enthralling hate-to-still-hate-but-sort-of-love romance, Jude will once and for all have to figure out if she has a place in the Faerie world.

(Spoilers ahead!) The Queen of Nothing opens just after Jude has been pronounced Queen of Faerie, only to be abruptly exiled by King Cardan. Jude finds herself unmoored in the mortal world, spending her time with Vivi and Oak, watching her fair share of reality television... and trying to convince a cannibalistic faerie from hunting her own in the mortal world. But when her twin sister Taryn shows up asking a favor, Jude jumps at the chance to return to the Faerie world, even if it means facing Cardan. When a dark curse is unveiled, Jude must become the first mortal Queen of Faerie and figure out how to break it — or she will risk upsetting the balance of the whole Faerie world.

Check out the stunning cover below, and keep reading below for an exclusive excerpt from The Queen of Nothing:

The screen door bangs. Then Taryn rushes in front of me, her gown blowing in the morning breeze. If I didn’t know what a real princess of Faerie looked like, I might think she resembled one. For a moment, it seems impossible that we’re related, no less identical.

“What happened to you?” she asks. “You look like you got into a fight.”

I don’t speak. I just keep walking. I am not even sure where I am going, as slow and stiff and sore as I am. Maybe to Bryern. He’ll find me a place to crash, even if I won’t like the price later. Even bunking with Grima Mog would be better than this.

"I need your help,” Taryn says.

"No," I say. “No. Absolutely not. Never. If that’s why you came here, now you’ve got your answer and you can leave.”

"Jude, just hear me out." She walks in front of me, causing me to have to look at her. I glance up and then start to circle around the billowing skirts of her dress.

"Also no." I say. “No, I won’t help you. No, I won’t hear you explain why I should. It really is a magical word: no. You say whatever bullshit you want and I just say no."

'The Queen Of Nothing' by Holly Black
Little, Brown Young Readers

"Locke is dead,” she blurts out.

I wheel around. Above us, the sky is bright and blue and clear. Birds call to one another from nearby trees. In the distance, there’s the sound of construction and road traffic. In this moment, the juxtaposition of standing in the mortal world and hearing about the demise of an immortal being — one that I knew, one I kissed — is especially surreal.

“Dead?” It seems impossible, after everything I’ve seen. “Are you sure?”

The night before his wedding, Locke and his friends tried to ride me down like a pack of dogs after a fox. I promised to pay him back for that. If he’s dead, I never will.

Nor will he ever plan another party for the purpose of humiliating Cardan. He won’t laugh with Nicasia nor play Taryn and I against one another again. Maybe I should be relieved, for all the trouble he caused. But I am surprised by feeling grief instead.

Taryn takes a breath, as if steeling herself. "He's dead because I killed him."

The Queen of Nothing by Holly Black is out Nov. 19, 2019 Pre-order it now from Little, Brown Young Readers.