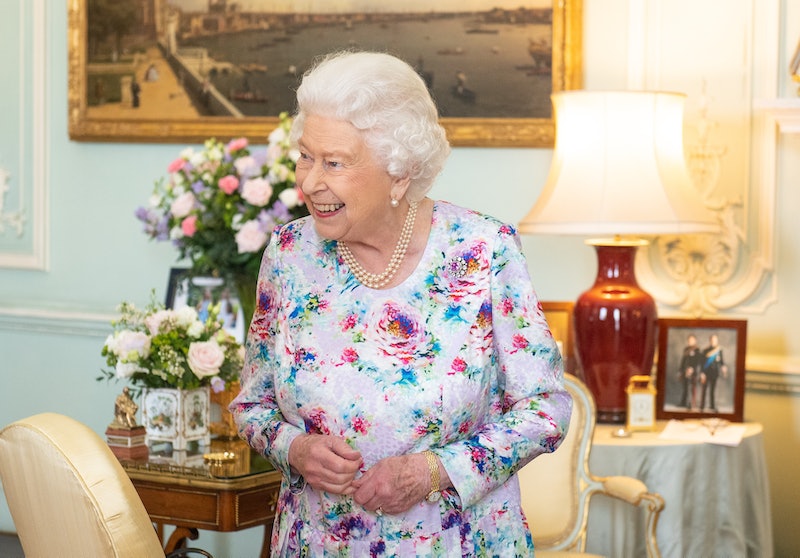 Buckingham Palace is a pretty big place to renovate, so it's no surprise that when the builders are in, they rarely see members of the royal family. However, the Queen once offered tea to a builder who was unaware he was talking to the British Monarch until she gave him a well-deserved cuppa. Yep, that totally happened and I wish it was caught on camera.

While the interaction between the Queen and the builder is sadly not a moment you can relive on YouTube, it's a memory that royal upholsterer Kevin Andrews cherishes. Andrews, who worked for the late Queen Mother, recounted the story in the upcoming Channel 5 documentary Secrets of the Royal Palaces. As the Daily Mail writes, a "builder was dismantling a desk [...] so he could not see who was making the offer when the lady's voice asked him if he would like a cup of tea."

As he had no idea it was the Queen of all people, he reportedly replied: "Yeah. In a mug. Two sugars. Builder's tea. I don't want any of that nonsense I had the last time I was here, all that fine china and all that saucer stuff". The Queen came back with the tea, told the builder it was on the table, and as he "looked up [he] saw the Queen leaving the room". Talk about awks. Although, the Queen apparently has a "wicked sense of humour" so she'd have probably taken that in jest — especially since the builder didn't have a clue who he was talking to.

This isn't the first time the Queen has gone unnoticed during an interaction with members of the public. Most recently, a group of American tourists were stunned to hear that they had spoken with her without even realising it. "She's up in Balmoral having a holiday, just relaxing," royal commentator Neil Sean told Nine News Australia (via the Express) earlier this month. "The Queen goes out and about in the grounds, not just hers but outside."

Sean went on to explain how the Queen dresses down while she's out and about, and a group of American tourists happened to be near and failed to recognise her. "They said to her, 'Hey, have you ever met the Queen?' And she said, 'Well, no, not me personally. But this gentleman who is a policeman has'. So they were more interested in the policeman who'd met the Queen than the actual Queen there."

Hopefully, more stories like this are told in the docu-series, which airs later this month according to the Daily Mail. Secrets of the Royal Palaces will give viewers a unique look at the inner-workings of the palace, which also includes "a glimpse inside the other royal residences, including Windsor Castle, Balmoral and Clarence House, where [...] Prince Charles and Duchess Camilla live."

While there won't be any tours of Kensington Palace or Frogmore Cottage, it's a fantastic opportunity to see what life is like for the royal family inside some of their residences.

More like this
Gillian Anderson's New Netflix Drama Is *Nothing* Like 'Sex Education'
By Frances Stewart
Matt Hancock’s TikTok Is The Most Matt Hancock Thing Ever
By Sam Ramsden
Harry Styles Had A Major Stage Malfunction At The Grammys
By Darshita Goyal
Dennis Quaid Dropped A Huge Parent Trap Revelation Via Taylor Swift's "Anti-Hero"
By Catharina Cheung
Get The Very Best Of Bustle/UK
Sign up for Bustle UK's twice-weekly newsletter, featuring the latest must-watch TV, moving personal stories, and expert advice on the hottest viral buys.