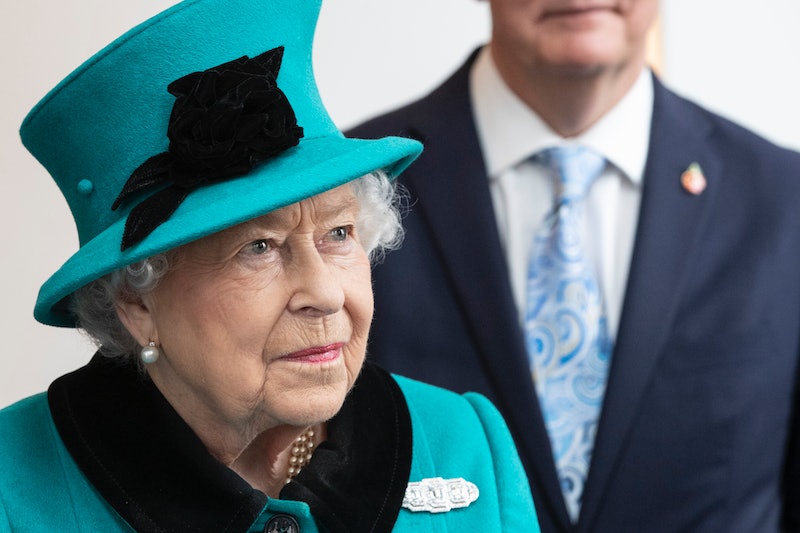 The Queen has had a fair few portraits done throughout her reign, and now she's added a brand new one to her extensive collection. But this one might blow them all out of the water. She's reached the the grand old age of 92 but is still performing all kinds of official duties and her zest for life certainly comes across in the picture. Yes, the Queen's has a new portrait and it's regal AF.

The new depicting is an oil painting and it's currently on display at the Queen's Scottish residency, the Palace of Holyroodhouse in Edinburgh, as People reported on Nov, 29. According to the Daily Mail, it was commissioned to improve "visitor experience" at the palace. It was painted by Nicky Philipps and it's the third time she has created a portrait of the Queen, according to the artist's website. The first had the Queen standing proud in front of her corgi minions — just imagine trying to keep four dogs still for long enough to paint a whole portrait — and it's currently on display at Buckingham Palace.

The next portrait was commissioned by The Royal Company of Archers — the unit of bodyguards who serve the royals at their Scottish residencies — to commemorate the Queen's 90th birthday, according to Philipps' site. If you wanna see for yourself, just take a trip to The Arches' Hall in Edinburgh, where you'll see the portrait hanging.

This new portrait continues Philipps' realist style — sorry, no pop art this time — but it does show the Queen at her steeliest. She's depicted wearing the velvety green robes of the Order of the Thistle, according to The Telegraph, which represents Scotland's highest honour. She stands in front of a pretty moody backdrop, staying true to the UK's frequently dismal weather, with a grey and gloomy sky.

Philipps told the Daily Mail that she found her third time painting the Queen "nerve-wracking," but still "enormous fun." The publication reports that the new picture is located close to the portrait of the Queen Mother which Sir William Oliphant Hutchison painted in 1967, as the two gals look over the royal dining room in Holyrood.

The Daily Mail claims that the portrait is based on the photo of the Queen which Annie Leibovitz took at Buckingham Palace in 2007. In it she's seen standing sternly in front of a dramatically grey sky and craggy backdrop — much like how Philipps' portrait depicts her. It's powerful and piercing and feels like the Queen could be looking right at in the pouring rain and saying, "Stop complaining. You're British."

For me, Philipps has nailed this one, and I think the new image of the Queen will endure for a long while in the nation's memory. But who'll be the next to paint her maj? I imagine the results may have been pretty different if Banksy was commissioned for the task. Although, I definitely wouldn't mind a David Shrigley take on the Queen's portrait, either. Philipps' creation will definitely do for now though. The Queen is looking seriously FIERCE.