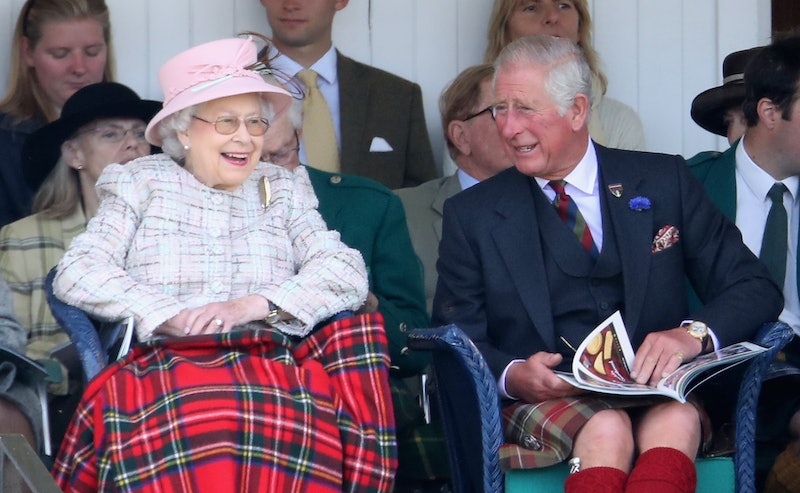 Prince Charles officially turned 70 on Tuesday (Nov. 13), and what better way to celebrate such a special milestone than surrounded by close friends and family at a dinner party. Hosted at Buckingham Palace, it was no surprise that the Queen's tribute to Prince Charles during his birthday dinner turned out to be the highlight of the night, which drew attention to the heartwarming bond that the Queen and her son share with one another.

The Dukes and Duchesses of Cambridge and Sussex were in attendance, alongside Prince Philip, newlyweds Princess Eugenie and Jack Brooksbank, and Princess Beatrice, amongst many other close royal family members and friends, according to Hello. To begin the black-tie event, the Queen raised a glass in celebration of Charles, and spoke of the privilege of being "able to propose a toast to her son on his 70th birthday," the Daily Mail reports. "It means that you have lived long enough to see your child grow up. It is rather like — to use an analogy I am certain will find favour — planting a tree and being able to watch it grow," she is reported to have said.

Charles' parents are obviously proud of everything he has achieved as heir to the throne, but are also proud of how he has extended the family with his children. "Over his 70 years, Philip and I have seen Charles become a champion of conservation and the arts, a great charitable leader — a dedicated and respected heir to the throne to stand comparison with any in history — and a wonderful father."

She continued: "Most of all, sustained by his wife Camilla, he is his own man, passionate and creative. So, this toast is to wish a happy birthday to my son, in every respect a Duchy original. To you Charles. To the Prince of Wales."

I'm sorry, but every time I read the Queen referring to her son as a "Duchy original," I just can't. This is the best thing 2018 has given us, that's for sure.

And if that wasn't enough, the Queen also described how The Queen Mother felt watching her eldest daughter turn 70, and referred to a jovial saying about this particular milestone. "She was heard to observe that 70 is exactly the age when the number of candles on your cake finally exceeds the amount of breath you have to blow them out."

Charles was reportedly "touched" by his mother's speech, as the Daily Mail pointed out how the royal family is "not known for its public pronouncements of love and affection."

This has certainly proven the opposite in recent years. It seems that with the arrivals of grandchildren and great-grandchildren, the numerous royal weddings, and the surge in insightful documentaries, the royal family are much more comfortable demonstrating their love for one another in public. I mean, you only have to take a glance at this recent photograph of The Prince of Wales surrounded by his wife, kids, daughters-in-law, and grandchildren to see that in action.

Whatever the future may hold, I'm definitely excited to see what this openness will bring in the future.