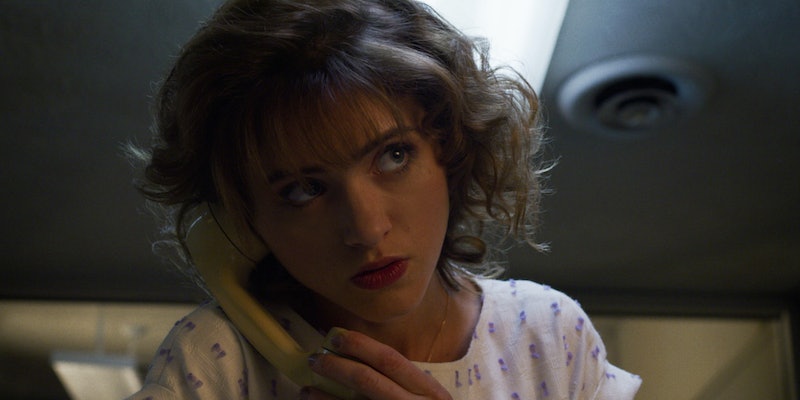 Just when you thought the Upside Down couldn't hold any more secrets, Digital Spy goes and points out that Stranger Things Season 3 included a Queer Eye cameo. Actually, make that two Queer Eye cameos. The reality show's Season 2 fan favorite William Mahnken appeared in two separate scenes during the newly released Season 3, where he played one of the misogynistic Hawkins Post editors who laughs at Nancy's idea for an article on how the Starcourt Mall is destroying downtown commerce.

William is a Queer Eye Season 2 "hero" who is best known for his super sweet proposal to his then-girlfriend Shannan. The Fab Five helped the Walmart worker gain the confidence he needed to make things official, and the beloved real-life couple are now married. In fact, Shannan can be spotted in Hawkins in the new season, too.

In addition to appearing during the editorial meeting, William pointed out on his Twitter page that he and Shannan appear as a couple having dinner in Enzo's when (minor spoiler alert) Hopper gets stood up. It seems his duties as a resident of Hawkins didn't end there either. Per Twitter, William can be spotted a total of nine times over the course of Season 3, and if that's not the perfect excuse to rewatch all eight episodes again, then what is?

This Queer Eye/Stranger Things crossover has left fans shocked and delighted. Twitter user @meganbailey_s wrote, "WILLIAM FROM QUEER EYE????? IN STRANGER THINGS SEASON 3??? MY HEART." And @amorfatiyousee added, "HOW IS NO ONE TALKING ABOUT THE FACT THAT THERE ARE queereye HEROES SHOWING UP IN strangerthingstv ?! I’m not gonna be able to pay attention now cause I’ll just be looking for cameos."

While William's cameo may feel unexpected, it actually makes sense when you consider that the Queer Eye favorite is active in the film and TV industry and he's a Georgia native (Stranger Things films around Atlanta). According to Digital Spy, this isn't even the reality star's first visit to the Upside Down. He previously appeared in Season 2 as an arcade attendant. Additionally, William's IMDb page reveals that he has also appeared in two episodes of The Walking Dead as a member of Negan's crew, and as a gravedigger in Amazon's Lore. (And never forget, he proposed to Shannan by making a short film about their epic love story.)

William's connection to Hawkins is just one more thing to add to the list of reasons why Stranger Things Season 3 is so much fun. This is the kind of corporate synergy that viewers are happy to support. After all, who doesn't want to see the worlds of Queer Eye and Stranger Things collide? Can you imagine what the Fab Five could do for Murray's wardrobe (before going on to recruit him as their assistant love guru)? If fans are lucky, this will only be the beginning of the crossover fun. Maybe the Fab Five themselves will show up in Season 4 — or, at the very least, perhaps Shannan and William can return to Hawkins for another romantic date at Enzo's.