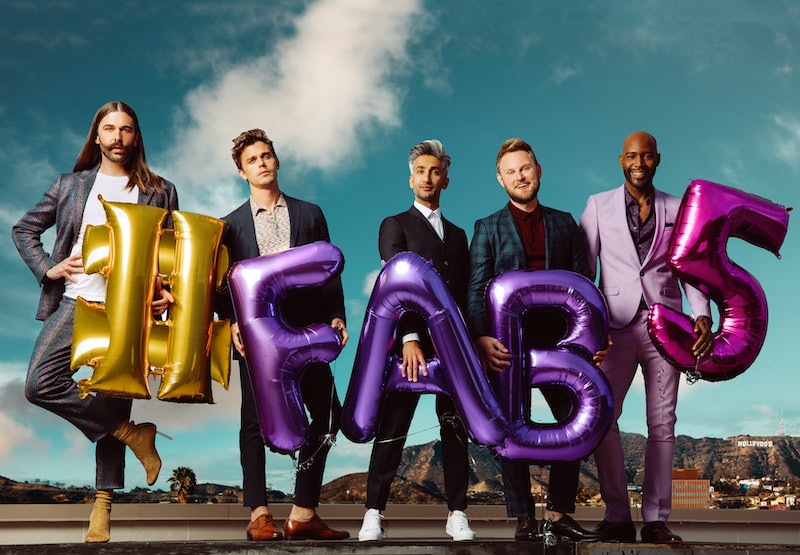 The second season of Queer Eye may not be out until Friday, but the Fab Five are already sharing some of their wisdom with fans. In an interview with BuzzFeed published Wednesday, they shared their thoughts on love and relationships, and the Queer Eye guys offered breakup advice. The cast suggested some ways to deal with heartache, beginning by cooking up some comfort food.

In response to a viewer who asked the cast how to build self-esteem back after a bad breakup, Antoni Porowski, the show's resident food and wine expert (and avocado lover), said, "You can start off by making a big fat mac and cheese." According to Porowski — who, based on a February 3 Instagram post, makes a mean mac and cheese himself — the meal is catalyst for self-care. He suggested that those struggling through a bad breakup should "light a candle, watch a show you really like." (New episodes of Queer Eye, perhaps?) He continued, saying, "Let yourself wallow and go through the emotions."

He also noted that while dessert can't hurt, it might be best served with friends. "It is important to check in with friends as well, so that you don't stay lonely and have your bestie come over with a pint of nice ice cream or your favorite dessert," Porowski said. Mac and cheese and dessert? Porowski sure knows how to get over a breakup.

Interior design specialist Bobby Berk suggested that after eating their fill of delicious foods, they turn their focus inward. "After you wallow like that, use that time you would have spent with that significant other to do a bit of self-care," he said. "Reflect on yourself and do things that make you happy and not worry about them."

Queer Eye culture expert Karamo Brown said he has found that putting his feelings down on paper helps him process his feelings and determine his next steps. "I'm always good for a list. After a breakup, I like to write down the parts of my self-esteem that were affected by that breakup," he said. Brown continued to impart his trademark relationship wisdom, saying,

"Because sometimes the issues we have in our minds get bigger and bigger if we don't address them. And sometimes just putting them on paper and seeing that this person actually broke you down because of your body can help you remember that you need to focus on loving your body so that it doesn't become a bigger issue. You can see what exactly you need to focus on."

On the show, which also stars style guide Tan France and grooming specialist Jonathan Van Ness, the Fab Five share this kind of compassionate and kind advice with their various mentees — or "heroes" as they're affectionately called — and Season 2 is shaping up to be even more inclusive than its predecessor, and every bit as emotional.

The second season will feature Queer Eye's first female and trans subjects, and finds the cast revealing more about themselves as well.

In an interview with Entertainment Tonight in June, Van Ness teased that fans would be learning a lot more of the Fab Five this time around, saying,

"It just gives us a chance to go a little deeper. You got a chance to know the five of us, and the [Season 2] stories just get a little more into our lives as well. So we're excited to show a little more of ourselves with everyone."

It sure sounds like Queer Eye Season 2 will be perfect post-breakup viewing — with mac and cheese, of course.