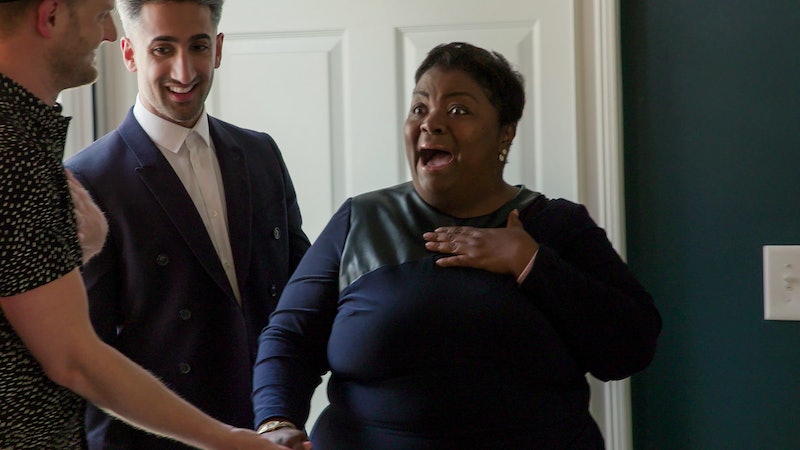 "Mama Tammye" Hicks was an instant fan favorite after she appeared in an episode of Queer Eye's second season. The selfless, churchgoing Georgia resident put a smile on everyone's faces, especially the Fab Five's. So when the Queer Eye stars reunited with Mama Tammye this week, there was plenty of joy to go around.

The Fab Five were on Good Morning America to discuss the show's third season, but Michael Strahan and the GMA crew had a surprise in store. After speaking with the guys for a few minutes, Strahan revealed that Tammye was actually backstage to greet the guys in person. And her son, Myles, was there, too.

Tammye shared how "grateful" she was for her Queer Eye makeover, and for the work the show did to help her local community center. (Tammye had wanted Bobby to help renovate her church's community center instead of her house, but both spaces got a makeover from the show.)

"Not only did you transform my life, you transformed my family's, a whole community," Tammye said to the Fab Five. "And for that, I am eternally grateful."

Tammye also read a passage from her journal during the Queer Eye episode's filming, in which she thanked God for sending the Fab Five to her community.

Myles also shared some photos of the GMA reunion on his Instagram account, writing in his caption, "the best reunion EVER! I have so much love for these guys."

As Tammye explained to Them during an interview last August, she originally struggled to accept Myles after he came out to her.

"I never told Myles anything like 'get out of my house,' but I thought I was building him up with love when I was really doing the opposite. I asked him for forgiveness," Tammye told Them. "It probably wasn't a few months later that the Fab Five showed up at my doorstep. I thought, how divine is this? God spoke to me in that moment." Tammye's opinions seem to have evolved a lot over time, though, and it's clear that she loves her son more than anything.

Jonathan shared a picture of himself and Tammye on Instagram, calling the reunion the "best surprise ever." Tan also shared via Instagram Stories a behind-the-scenes video of himself, his costars, and Tammye, saying in the clip, "We love her so much." It's clear from the way the Fab Five instantly started running toward Tammye on GMA that they all formed a lasting connection, even after the show's filming.

Tammye's openness about her son, as well as her embracing the LGBTQA+ community, are proof that people's hearts really can change. Tammye's selfless attitude and openness to other perspectives won fans' hearts, as well as the Fab Five's, which makes this week's reunion all the more heartwarming.