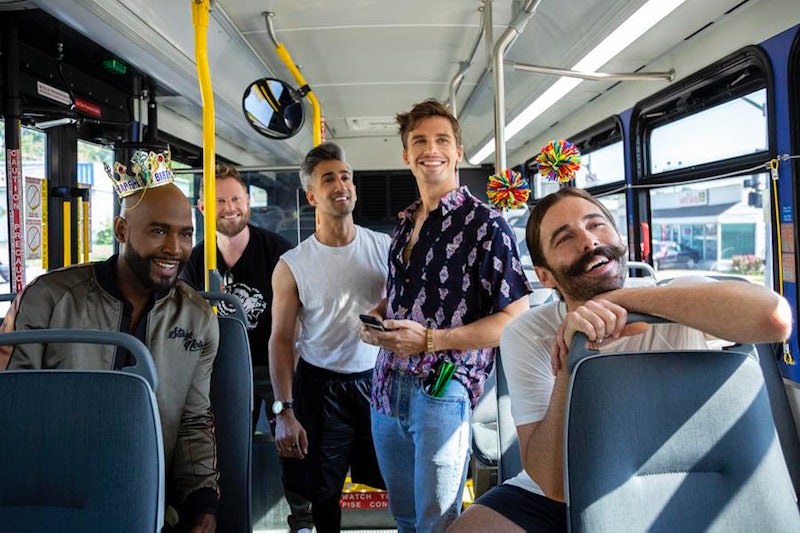 It's time to clear your schedules for the foreseeable future because the Fab 5 are gearing up to grace your TV screens once again. The Queer Eye Season 3 premiere date has finally been announced, and based on the brief video tease Netflix has released, the new installment is going to be nothing short of fabulous. (Should we expect anything less from these guys?) The third season is set to debut worldwide on March 15, so mark those calendars now, hennys — as Jonathan Van Ness would say. Because this is one series you know you're going to want to watch again and again and again.

The video clip, which was unveiled on Instagram, was created in the form of a group text between the members of the Fab 5, which is made up of Tan France (fashion), Antoni Porowski (food and wine), Bobby Berk (interior design), Karamo Brown (culture), and Jonathan Van Ness (grooming). In the text, they're discussing their plans for Valentine's Day this year while a preview of Carly Rae Jepsen’s upcoming song “Now That I Found You" plays on in the background. Basically, it's just enough of a tease to help remind you how much you love these guys in the first place, making the show's return all the more exciting.

"WE'RE BAAACK HENNYS! Get ready to 💗 L<3VE YOURSELF! 💗 Queer Eye 3 launches March 15. HUGE thanks to @carlyraejepsen for this exclusive preview of her *NEW BOP*, 'Now That I Found You.'"

Though the first two seasons were filmed strictly Georgia, Season 3 will be breaking with tradition by having the group head out to Kansas City, Missouri to work some of their magic on the people over there and "bring their infectious brand of self-love, confidence and encouragement to a whole new roster of heroes," according to a Season 3 press release provided to Bustle.

Additionally, the cast is currently filming four special episodes in Japan as well, which will drop some time after Season 3 drops on the streaming platform. “In just a year since we launched season one, Queer Eye has become a global phenomenon once again and the Fab Five are truly the ambassadors of self-care and compassion that the world needs now more than ever," Queer Eye creator and exec producer David Collins said in a statement. "Filming in Japan is a wonderful opportunity for us to work with four deserving heroes that will help showcase the incredible traditions and customs of their country."

In the meantime, though, Season 3 is sure to be just as wonderful as ever and will supposedly include a pretty epic celebrity cameo. “I will say this much… the biggest of the big of the big of the big, of the most major earth-shattering, earth-moving, earth-shattering cameos could maybe happen,” Van Ness teased to Entertainment Tonight back in August 2018. So prepare yourselves, folks — this is one Queer Eye season you aren't going to want to miss.