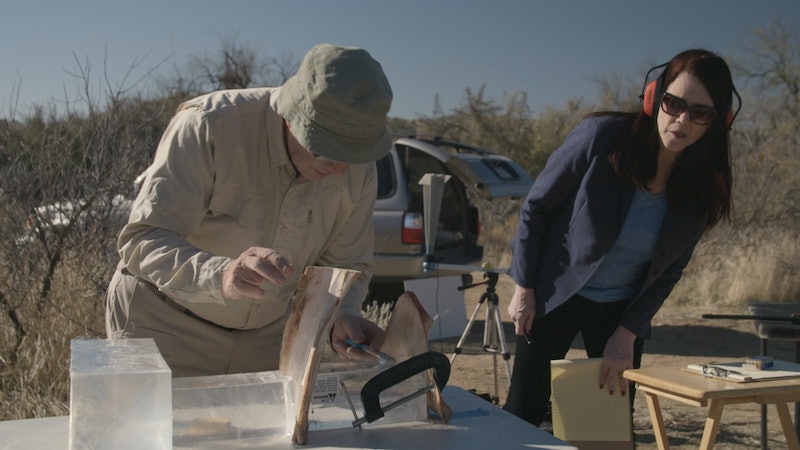 Making A Murderer Part 1 set out to accomplish a nearly impossible feat — to condense years of research and legal efforts into a ten-hour series for entertaining consumption. Because of the time constraints, some details weren't fully explored in Part 1, but a theory investigated in Part 2 of Making A Murderer brings up even more questions about what actually happened on the night Teresa Halbach went missing. The Radandt Quarry Theory from Making a Murderer Part 2 comes down to one simple question — where were Halbach's bones burned?

Following Halbach's death in 2005, human bones were found in three places near the Avery residence. Former Avery attorney Jerry Buting told Rolling Stone that these locations were a burn pit outside of Avery's house, a burn barrel behind Brendan Dassey's house just next door to Avery's house, and in the middle of the quarry that neighbors the Avery property. It's that third location that Kathleen Zellner, Steven Avery's current defense attorney, investigates in Making A Murderer Part 2. In the documentary, Zellner says that if she finds out how those pelvic bones ended up dozens of yards away from where the other bones were found, she could discover the truth behind how Halbach's car and bones ended up on the Avery property.

In Making A Murderer Part 2, Zellner's legal team alleges that the bones found on the Radandt property showed no sign of a burn site or a burn barrel nearby. Zellner suggests that someone could have carried bones through the quarry, and could have dropped those bone fragments on the Radandt property before placing the rest of the bones on the Avery property. Further, Zellner's legal team states that the bones found in the quarry feature the same cut marks found in the burn barrel on the Avery property.

In addition to Zellner's investigation into the quarry, the USA Today Network-Wisconsin, via the Post Crescent, reviewed an investigation report on Halbach's death compiled by the Calumet County Sheriff's Department and identified a variety of clues that could play a role in Avery and Dassey's post-conviction futures. Some of these clues include an allegation that the Manitowoc and Calumet County authorities allowed access to the quarry on at least four instances while investigating. The Post Crescent states that Zellner believes that it was during this period that Halbach's car and bones were moved through the Radandt quarry and on to the Avery property. Asked about allegations that Manitowoc County authorities may have tampered with evidence or framed Avery, Manitowoc County Sheriff Robert Hermann told Bustle via email, "At this time I am not discussing or making any further comments related to this case."

While speaking with land owner Joshua Radandt, as seen in Making A Murderer Part 2, Zellner learns that the place where the pelvic bones were found was actually on Manitowoc County property, and that the police told Radandt privately that they theorized that Teresa's car had re-entered the Avery property through his quarry. In a motion obtained by Newsweek, Avery's lawyers explain that " the State’s theory [is] that the victim’s vehicle never left the Avery property after her arrival on October 31."

The discrepancy between what the police told Radandt and what the police told Avery's defense lawyers is a Brady violation, as the authorities' evidence of the theory that Halbach's car was taken through the quarry was never disclosed to the defense. The 1963 case Brady v. Maryland states that all evidence discovered by the prosecution that may be helpful to the defendant must be turned over to said defendant. Zellner calls this "the violation that is most likely to vacate a conviction."

If the presence of those pelvic bones found on Manitowoc County property prove that Teresa Halbach left Avery's property after meeting him on October 31, it help the prosecution's case. This would introduce doubt into the prosecution's allegation that Halbach was killed and burned on Avery's property, and leave room for Zellner to argue that someone else killed Halbach and framed Avery. However, with no proof of Halbach's whereabouts between her meeting Avery and her death, this is all just one of many theories about the truth of what happened on the last day of Teresa Halbach's life.