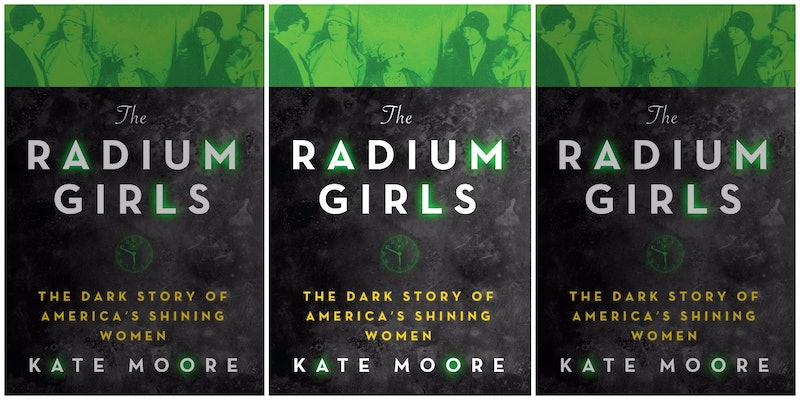 It may be 2017, but working women are still facing many of the same issues that have been plaguing them for decades: sexism, unequal pay, misogyny, sexual harassment, and more. And while these issues may be widely discussed now, there's another, often ignored chapter of history that shapes the narrative of women in the workplace, and Kate Moore's The Radium Girls tells that dark story.

When radium was discovered by Marie and Pierre Curie in 1898, it quickly became known as the "wonder" element, not only because of its luminous glow, but because of the incredible things it was able to do. By the early 20th century, radium was being used in just about everything: it was added to drinking water to cure arthritis, mixed into cosmetics to brighten skin, and even became an ingredient in many foods, including chocolate. For the women at the heart of Moore's story, radium was the magical element that gave them an opportunity for freedom and independence — that is, until they discovered that it was killing them, too.

In The Radium Girls: The Dark Story of America's Shining Women, Kate Moore pieces together the complicated history of radium in the United States through the stories of the men who got rich off of the element, the girls who were dying as a consequence, and the women who stood up and demanded justice and the truth.

At the height of radium's popularity, the United States Radium Corporation and the Radiant Dial Company, the leading manufacturers of self-luminous watches in the U.S., employed hundreds of women in New Jersey, and Illinois, Connecticut. As employees of these highly respected studios, these young girls, many of whom were poor daughters of immigrant parents or young women seeking independence and opportunities of their own, were charged with the task of painting watch faces with glowing paint whose main ingredient was radium. A highly sought-after job, the Radium Girls, as they would later be known, were "the envy of others," who were idolized for not only the fancy clothes they could afford because of their well-paying jobs, but because of the glow their clothes and skin adopted after a day's work.

At the watch "studios" — or factories — the girls' work spaces were filled with the stuff: radium powder covered their station, clung to their clothes, got inhaled through their breath, and was even inserted into their mouths as part of the paintbrush tipping process — "Lip... Dip... Paint." — every employee used. No one ever told these girls the dangers of the radium, at first because they were unknown, and then later, because they reality of the harm it caused was an undesirable fact to the men who were making money from it. So, all day long, the working girls surrounded themselves in what they believed to be the wonder element that was helping them gain their independence.

Over time, though, these Radium Girls also found something else, something much more sinister than a young women with her own freedom. After working in the factory for some time, many of the girls found aching feet and knees, crippling back pain, degenerating teeth and jaws, and in some of the worst cases, a slow and painful deaths. As Moore describes the death of Amelia Malia "Mollie" Maggia in her book,

"The disease 'slowly ate its way through her jugular vein.' On September 12, at five p.m., her mouth was flooded with blood as she hemorrhaged so fast that [her sister] Edith could not staunch it. Her mouth, empty of teeth, empty of jawbone, empty of words, filled up with blood, instead, until it spilled over her lips and down her stricken, shaken face. It was too much. She died, her sister Quinta said, a 'painful and terrible death.' She was just twenty-four years old."

One by one, the women who worked in these factories saw their bright futures darken as their bodies became literally brighter because of radium exposure. Across the country at each studio, girls were getting sick, losing their teeth, watching their lives fall apart, their friends pass away, all the while seeking answers that were being hidden from them from the corporations who depended on their labor to keep making money. Not much unlike the modern American war against science being waged by our government and big business, the radium companies of the 20th century ignored the facts and hid the truth, resulting in deadly consequences.

But also not unlike modern America, there were some people willing to stand up for what was right: the Radium Girls. Though much of her book is filled with sickness, death, and injustice after injustice, Moore's narrative doesn't just leave you with a tragic story of beautiful young girls deteriorating and disappearing from history altogether. Instead, she brings to life "five girls crying out for justice; five girls fighting for their cause. Grace, Katherine, Quinta, Albina, and Edna," in what would later be know as "The Case of the Five Women Doomed to Die."

Fresh off the heels of winning the right to vote, five of the women from the radium factories in New Jersey decided to sue their former employer for keeping the dangers of radium a secret from their employees, a greedy and dangerous decision which lead to the destruction of dozens of lives. In a landmark case that would change the course of worker's rights in America, these doomed women became a glowing beacon of hope for justice, equality, and accountability.

A perfect blend of the historical, the scientific, and the personal, this richly detailed book sheds a whole new light on this unique element and the role it played in changing workers' rights. The Radium Girls makes it impossible for you to ignore these women's incredible stories, and proves why, now more than ever, we can't afford to ignore science, either.