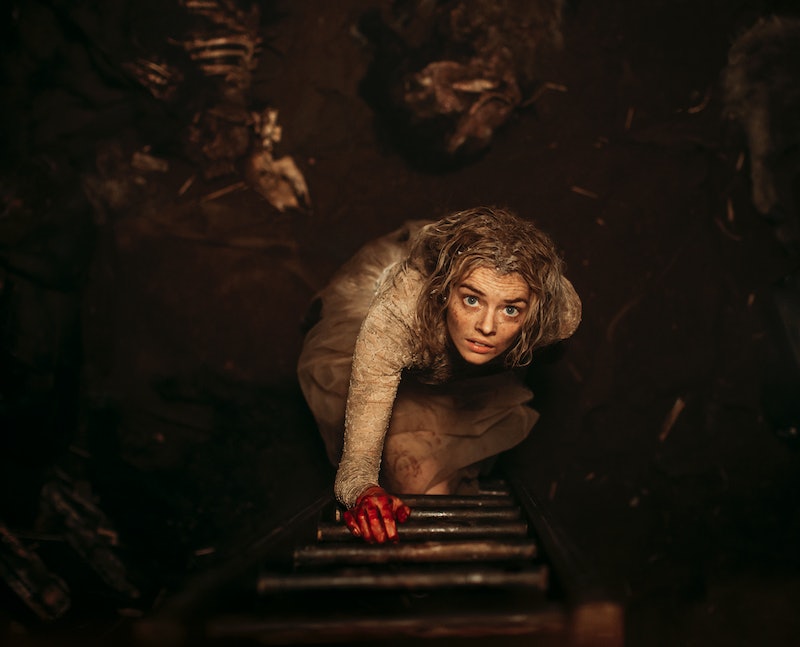 Major Ready or Not spoilers ahead. In Ready or Not, a former foster kid named Grace (Samara Weaving) marries Alex Le Domas (Mark O'Brien), who comes from an old and extremely wealthy clan who made their fortune in board games. But before she can officially be considered part of the family, Grace must participate in a game of hide-and-seek that's meant to end in her death. The Le Domases believe that, if they don't sacrifice Grace in their Satanic ritual before sunrise, all of their lives will be taken instead. Luckily, the bloody ending of Ready or Not sees Grace emerge triumphant.

As the family patriarch Tony (Henry Czerny) explains in the film, the ritual all began when his great grandfather Victor Le Domas made a deal with the devil, who he met in the form of a fellow merchant seaman called Mr. Le Bail. He granted Le Domas and his successors all of their wishes for riches and success, but with the condition that each time someone new joins, the family and their new recruit must play a game together. And this game could be anything from checkers and chess, but the hide-and-seek game is the only one with a lethal twist. The challenge depends on the card the newcomer draws from a mysterious box the Le Domases inherited from Le Bail. Alex explains to Grace that he'd just hoped that she'd be lucky enough to draw any other card.

Hide-and-seek had only been played once before in the current family's lifetime, and that was when Aunt Helene (Nicky Guadagni) got married, which audiences see in the flashback that opens the film. Though Helene claims to have loved her husband, when it came down to it, she saw his life as insignificant as compared to her family's and was willing to have him die if it meant the survival of her family. This reinforces the underlying theme that rich families like the Le Domases are willing to crush "little people" like Grace if only for the sake of their family legacy.

It's not clear throughout most of the movie whether or not the family is just delusional — especially since brothers Alex and Daniel (Adam Brody) seem not to be fully convinced of their family's beliefs. But the final moments of the film prove that supernatural forces really were at play in the bride hunt. By sunrise, after having failed to complete the ritual, every single one of the remaining Le Domas family members explodes — without any visible, physical catalyst.

But of course, before getting to the shocking but satisfying point where her predators die right in front of her, Grace has to go through a lot. She witnesses some very gory deaths, takes a bullet to her hand, escapes a pit full of corpses by taking a nail through that same hand, survives a car crash, and ultimately gets captured after being betrayed by her own husband.

Still, being the resourceful and courageous badass that she is, Grace is able to avoid being sacrificed before dawn. When morning comes the entire family is surprised, as nothing happens to them the first moment sunlight beams into the family game room. But, just as Aunt Helene tries to make up for her family's failure by killing Grace, she spontaneously combusts. One by one, the rest of the Le Domases — including the children — meet the same fate. And Grace just laughs at the madness. When it's her traitor of a husband's turn to die, she walks away from him, throws her wedding ring, and says, "I want a divorce." Before she leaves the house, Grace catches a glimpse of Le Bail in his designated chair.

The supernatural element of the film is so downplayed throughout the film — with Grace calling it "bullsh*t" — that the bloody ending may catch you off guard. But, of course, it was always going to be either Grace or the Le Domases. One or the other had to die.

In the very last scene, the entire manor goes up in flames, and an extremely calm Grace sits on the front steps in her bloodied and heavily soiled wedding dress, smoking a cigarette as the fire brigade shows up. When a fireman asks her what happened, Grace's response is succinct: "In-laws."

And while there isn't really a moral to be learned from all the bloodshed, actor Weaving offered a warning in a storytelling session with Fandango. "Be careful out there, I think is the lesson," she said. "Maybe meet the family before you get married."