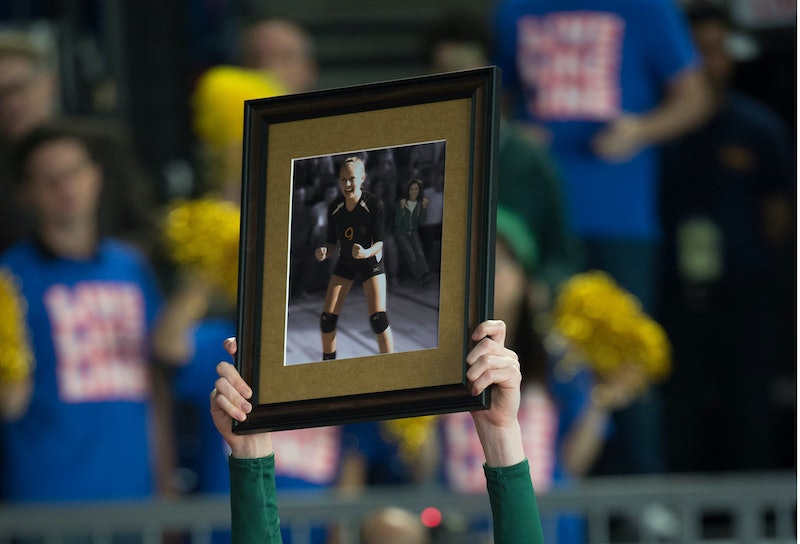 Sports movies are almost always inspirational. Think of the underdog Rocky Balboa going the distance against the world champ Apollo Creed in Rocky, the overmatched and dysfunctional Hickory Huskers winning the state championship in Hoosiers, or Team USA overcoming the odds to defeat the favorites from Iceland in D2: The Mighty Ducks. But a new entry to the list, The Miracle Season, may be the most inspirational yet, as it tells the true story of a high school volleyball team moving on after the tragic death of their leader, Caroline Found. But the tale of the real Caroline Found from The Miracle Season is somehow even more amazing than the film.

The movie stars Helen Hunt as Kathy Bresnahan, coach of the Iowa City West High women's volleyball team, and is based on the book of the same name by Bresnahan. Under Bresnahan, the team won the state title in 2010 behind the strong play of their team captain, Caroline "Line" Found, who stated before the 2011 season that the team would repeat as state champs, according to the Iowa City Press-Citizen. But before the 2011 school year began, Found was killed in a moped accident. Without their leader and star player, the team struggled mightily early in the season before rallying around the memory of their fallen teammate, ultimately triumphing unexpectedly and winning the state title again in 2011 — just like Line said they would.

So now that you know the incredible real life story behind the film, what is there to know about the young woman who inspired it all? "What I remember the most about Caroline was her smile ... her smile and her laugh," Caroline's father Ernie Found said, according to The Gazette of Cedar Rapids, IA. "She could almost make light of something despite of how serious it might be at the moment in order to make everybody feel better."

Found was also an inspiration to her peers, showing wisdom beyond her years. "Simply, Caroline has inspired me to be a better person. She taught me to love a little harder, laugh a little more, and not to fret the small stuff," Found's former teammate and friend, Ally Disterhoft, told The Gazette. "I think that her story has inspired hundreds of other people as well, and that is truly amazing ... I am a better person today because I knew Caroline. To know her was to love her, and I feel blessed to have had the opportunity to do both."

Found was born June 19, 1994 in Iowa City, and she passed away on Aug. 11, 2011. According to her obituary from Gay & Ciha Funeral and Cremation Service, "her greatest pleasures were the people she met and the relationships she grew." Her obituary also states that, in addition to her widely-known skills on the volleyball court, "Caroline had a bounty of amazing gifts, chief of which was her ability to make others smile. She lit up the world with her enthusiasm, and her vibrant spirit made her a friend to everyone."

An ESPN profile of Found by Walter Villa sheds more light on the type of outgoing and fun-loving person Found was, stating that she "was a compassionate classmate who wouldn’t let a shy kid eat lunch alone. She was a mischievous student who once ordered pizza while serving detention for a minor infraction. She was a gregarious girl who made friends — even of opposing players — everywhere she went."

Given how friendly, loving, and caring Caroline Found was, it's no wonder that even after her death she was still able to inspire her old team to rise up against all odds and become champions in her memory.