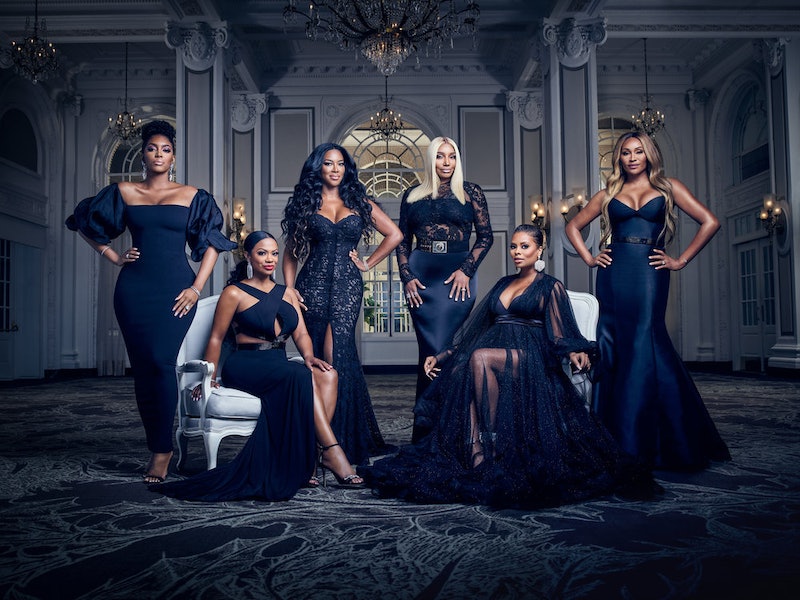 Hold onto your wig because Bravo's favorite Georgia peaches are back, and the drama is juicier than ever. The Real Housewives of Atlanta Season 12 trailer is here, and it teases what could possibly be the show's most explosive season yet. In the first 30 seconds alone, there's family drama, a major physical altercation, and the return of Kenya Moore as a Real Housewife.

Kenya is back as a full-time Housewife after leaving the show before its eleventh season, joining Cynthia Bailey, Kandi Burruss, Porsha Williams, Eva Marcille, and OG Housewife NeNe Leakes. Marlo Hampton and Tanya Sam are also returning as official Friends of the Housewives, and, based on the trailer, everybody is sure to be bringing plenty of drama with them.

As the trailer teases, every woman seems to be doing well in their own right, whether they're welcoming new children, new love interests, or new businesses into their lives (and some of them have more than one). But as every Bravo fan knows, it's only a matter of time before things erupt into chaos. "Everyone seems like they’re exactly where they want to be, but you can always expect for some b*llsh*t to be coming," Cynthia ominously teased in the new trailer.

NeNe seems to have reconnected with her husband Gregg, who is now cancer-free, but now she's worried about him "creeping around Atlanta." In one scene, she asks him, "How do you feel about open marriages?" Meanwhile, Eva is getting ready to welcome her third child, and Kandi is also looking to expand her family again, this time with the help of a surrogate.

Kenya and Porsha should be living the American dream, as they both recently welcomed new children with the men in their lives, but this season proves that they're not in a fairy tale. Porsha seemingly undergoes couples therapy with her fiance Dennis McKinley to fix something that's "not forgivable."

Kenya also has trouble in paradise as she admits to her friend Cynthia that she's at a "really low point" in her marriage to Marc Daly. On Sept. 19, Kenya announced that she was separating from Daly, meaning that fans will see the cracks in their relationship on screen. Cynthia, meanwhile, gets engaged to boyfriend Mike Hill this season, but even they have some issues to work out before they walk down the aisle.

But no personal drama compares to the stressful scene that kicks off the trailer, teasing what looks to be an intense physical altercation between the ladies. Based off moments seen later in the trailer, it seems that the explosive fight might center around NeNe and Cynthia's damaged friendship. In other clips, NeNe claims to Marlo that Cynthia has "a side of her" that the other ladies don't know. But all of this might come to light, as it's revealed that someone apparently recorded Cynthia "dogging" NeNe behind her back. When all of the ladies finally get together, Kenya announces to the group that they will not leave until they find the "snake" in the room, and this seems to be the meeting that ends up getting violent.

The new season of RHOA premieres on Sunday, Nov. 3, and although it looks like NeNe and Cynthia's infamous friendship contract has been broken, who knows what their friendship will look like once the season is over.