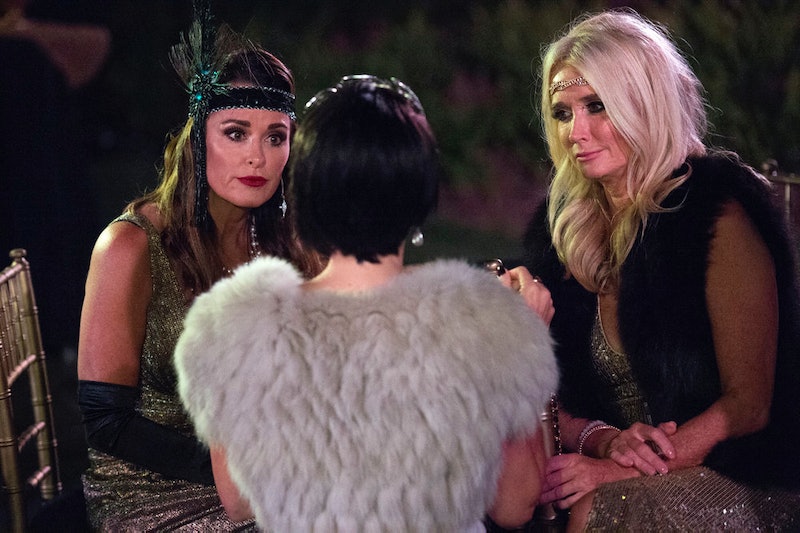 It just wouldn't be a season of The Real Housewives of Beverly Hills of without a fabulous, luxury vacation to make us all feel inadequate about our family trips to Cape Cod. This season the RHOBH stars took a trip to Punta Mita, Mexico for Mauricio's new agency opening. It's always fun to see a group with so much aggression towards each other put themselves in the position of being stuck with each other for an extended period of time, miles away from their mansions. Luckily, Mexico didn't erase any of the drama that came before it, and a good old-fashioned confrontation occurred.

You see, the whole feud with Eden and Kyle carried right on over to this week and got even bigger. Of course, Rinna is involved because our Rinna just can't stay away from drama when it rears its ugly head. It was she who told Eden that she thought that Kyle was enabling Kim and claimed that their relationship is not healthy for Kim's sobriety. That got back to LVP because Eden kind of wanted to clear her name and explain why she was being so pushy about extending her advice to the Richards sisters. Then the conversation made its way to Kyle in Mexico.

It's funny because Rinna was talking to Camille about how much she was dreading having to spend so much time with the other Housewives down in Mexico. She even called it part of her "journey" again. Obviously, the whole thing with Eden made her trip even more obnoxious because LVP was letting everyone down there know all about the shenanigans before Rinna even arrived.

The most savage moment occurred when Kyle responded to the Rinna news with "Rinna needs to sew her f*cking mouth shut" and LVP replied with, "You'd need a lot of thread." Burn. So much burn.

It looks like next week, things will really explode. No one was truly confronted this week and all of the women have different opinions about the whole thing. Of course, Dorit is game for the fight. It should be pretty ugly next week, guys.