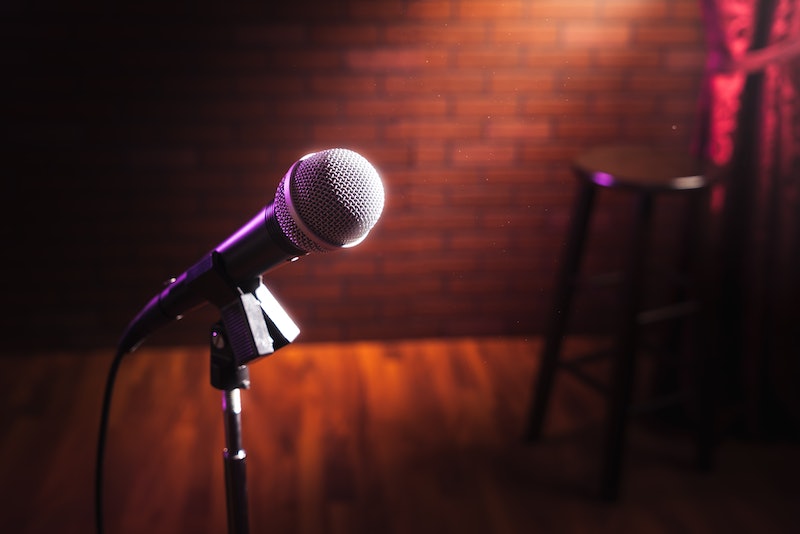 August is slowly coming to an end, which means sadly so is one of the biggest theatre festivals too. Now that Edinburgh Fringe Festival is wrapping up, all the awards and reviews for best shows are rolling in. Every year, comedy channel Dave hold the Funniest Joke Award at Edinburgh Fringe. But this year's joke has been received with criticism and has opened up a wider conversation surrounding the festival and mainstream comedy's diversity problem.

According to the Independent, Dave has been awarding the Funniest Joke trophy since 2009. In order to pick a winner, a select number of jokes are shortlisted by "a panel of UK's foremost comedy critics," the Dave website explains, and, after that, 2,000 members of the British public vote in a poll for their favourite one, according to the BBC.

This year, the funniest joke was awarded to Swedish comedian Olaf Falafel, who won with a pun about vegetables and the neurological condition Tourette's Syndrome. The condition causes people to have involuntary ticks, and it usually begins in childhood.

Now the charity Tourettes Action has asked the comedian to apologise for the joke. Suzanne Dobson, chief executive of the charity, said:

“Humour is a great way of educating people — but not only is it not funny to poke fun at people with Tourette's, it's not even that funny a joke, is it?"

I think she's right. I for one didn’t laugh at the joke. Maybe puns aren’t my thing... or maybe jokes where the punchline is about people with Tourette's Syndrome just aren't that amusing. It makes me wonder which “experts” are choosing the jokes and why they think laughing at this kind of thing is funny.

The previous 10 winners of the award have all been men and majority white. This year's judging panel (Steve Bennett, Mark Boosey, Bruce Dessau, Brian Donaldson, Mark Monahan, Sarah Henley, Veronica Lee, Sharon Lougher, Kate Stone, and Mark Wareham) included four women and six men, three of whom were called Mark. So, that speaks for itself really.

According to the Independent, the jokes are listed anonymously to avoid bias towards better-known comedians. The question is, then, why do men keep winning the award? Is it a coincidence? Or is it simply because they are funnier?

I think not. It seems to me that it's because these are the kind of jokes that have been been solidified as gold standard humour by decades of appreciation from comedy critics who look and act exactly like the people on stage. An echo chamber of comedy, if you will.

Call me politically correct, but I can’t really see the humour in making a joke at the expense of people with a neurological disorder that currently has no cure and affects so many globally. It’s tacky at best and, at worst, abelist. I’ve never been a fan of the kind of humour that punches down, regardless of the intentions behind it. For me, comedy always comes with context and power dynamics. Men making jokes at the expense of women is tired, able-bodied people making jokes at the expense of differently-abled people is boring, and so are racist jokes. This is why mainstream comedy needs to be more reflective of society.

If I turn on the TV to a comedy panel show or stand up show, 9 out of 10 times I expect to see a boy's club and, if I'm lucky, one woman. There’s nothing I find less amusing than the same five able-bodied middle-class men telling the same “jokes” on the same leading comedy shows on TV.

But things are slowly changing, ITV have now banned all male comedy writing teams. And The Femmes of Colour Comedy Club at Edinburgh Fringe this year were offering up laughs from the perspectives of women, trans, and non-binary comedians of colour. I want to see comedy by differently abled people, by people in the LGBTQ community, by people of all genders, by people of colour and especially by those who lie in those intersections. Personally, I don’t turn to Dave for a kick of humour, and the real joke here is the lack of diversity in comedy.