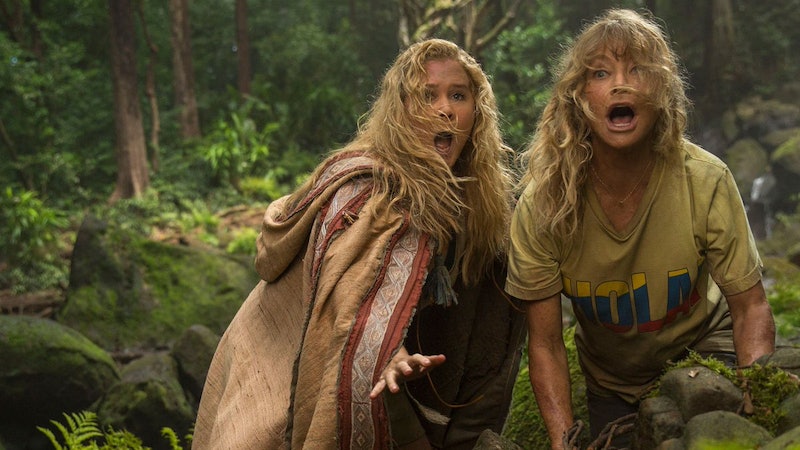 I would be hard-pressed to find a woman who claims her relationship with her mother is perfect. Sure, our moms gave us life, but boy can they be frustrating. This complicated relationship is explored in 2017's Mother's Day offering Snatched, starring Amy Schumer and Goldie Hawn (out May 12). The film, written by Ghostbusters' Katie Dippold, follows a young woman, Emily (Schumer), who reluctantly brings her mother Linda (Hawn) on a romantic getaway after her boyfriend dumps her right before the trip. Their vacation turns into an overseas horror story as the women are kidnapped and separated from one another in the jungles of Columbia. The R-rated comedy aims to live inside the complex dynamic between mother and daughter — the good, the bad, and the often ugly. It's a relationship that is relatable for many women — and according to Schumer and Dippold, there's a reason (or two) we both love and hate our moms.

"It's a vicious cycle," Dippold tells me over the phone. "It starts off that you miss your mom so you spend time with her. Then she just annoys you and you get cranky and irritable and you snap. Then you feel guilty, so you spend more time with her and you're like, 'Aw, I feel so lucky to have my mom. Yay!' And then once again, you get annoyed."

This "vicious cycle" might not be the case for all mothers and daughters, but I can certainly relate, and so can Schumer, who says her own relationship with her mother is anything but simple.

"My mom loves me like crazy, but it's tough to give up control," she tells me during the Los Angeles press day for the film. "You have this ownership over your kids and then they're gone. I'll get off the phone with her by being like, 'OK I'm going to go shower.' And she'll go, 'OK, well you shower,' you know? Like, I'm already doing that. But she wants to be like she's telling [me] what to do."

Another element to the often tumultuous mother-daughter bond is the idea that eventually, we all become our mothers. It's an old adage that some daughters may or may not relate to, but Dippold certainly does.

"I see myself becoming more and more like her," she says. "There's something very specific about the mother-daughter relationship. There's no one who you can fight with more, but there's no one you're closer to in your life. I think about my mom — she can get me so annoyed – but if I take even a moment to think about the day when my mom's not there anymore, I will start crying."

Though she's not a mom herself, Dippold is able to step into her mother's shoes and see these frustrating situations through her mom's eyes. "I can't imagine being a mom and having raised this child who is now cranky towards you. I would be livid. I would be like, 'Are you serious? Do you know how much I did for you and now you're going to be cranky to me?' But there's something about moms, they just bring out this side..." she says, trailing off. "Even to this day if I'm visiting my mom and it's in the morning and we're supposed to go to the mall or something, she'll be like, 'Katie, time to get up.' And I'll crankily be like, 'I'm up!' even though I'm still in bed. I'm 37-years-old and I still do that."

Despite the ups and downs that come with having (and being) a mother, Dippold wants nothing but happiness for the woman who brought her into the world. And as it turns out, it was actually her parents' divorce that inspired writing Snatched.

"My parents divorced in college very suddenly. I noticed [my mother] became a little more cautious and less adventurous. She used to always be up for something crazy," she says of her mother before the divorce. "But after something shifted. This was just wish fulfillment of like, 'What kind of trip can I take her on that would shake that up?' And so that's what inspired it."

It's safe to say that Schumer and Hawn's characters emerge from their vacation-from-hell as two completely different women, but their familial bond is strengthened during the arduous journey. Though most daughters won't be thrust into the unthinkable circumstances of Snatched, I know I for one would risk a lot (those pesky tapeworms included) to rescue my mom from a Columbian jungle, as much as I might sometimes hate (read: love) her.