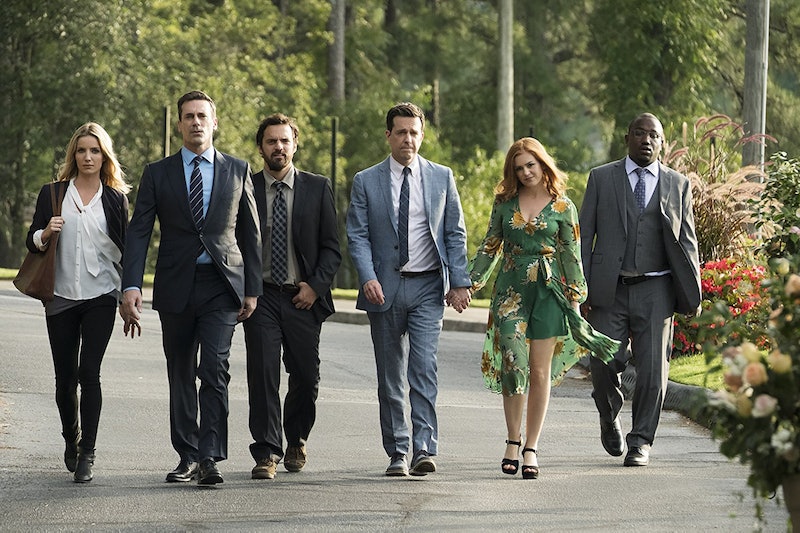 A lot of movies are based on or inspired by true stories, but you're unlikely to find one as bizarre as Tag. The new comedy is about a group of adult friends who have been competing in a high stakes game of tag for several decades, and it's actually, amazingly, based on a real life group of friends who call themselves the "Tag Brothers." And the real Tag brothers are even more unbelievable than their on screen counterparts.

The movie tweaks the real story a good deal, and features Jon Hamm, Hannibal Buress, Ed Helms, Jake Johnson, and Jeremy Renner as the participants of the game — though all of their characters are fictional and not named after any real life Tag Brothers. In the film version, the game of tag began when they were nine years old and has continued for the past 30 years, taking place in the month of May. Whoever remains "it" at the end of the month must remain "it" until the following year's game. But Renner's character, Jerry Pierce, has never been "it" and is considering bowing out of the game, leading to an all-out battle to tag him. The real version, while sharing some similarities, is quite a bit different.

The real life Tag Brothers are Bill Akers, Patrick Schultheis, Sean Raftis, Mike Konesky, Brian Dennehy, Joey Tombari, Rick Bruya, Chris Ammann, Mark Mengert, and Joey "Beef" Caferro. Their tag game began in high school at Gonzaga Prep in Spokane, WA, and continued until they graduated, after which it stopped. It wouldn't begin again until the group got together a decade later and decided to start a new version, which is more in line with what's seen in the movie. In this new annual game, the month of February was fair game for being tagged, and whoever remained "it" at the end of the month would live with the shame for the next year.

The movie was written by screenwriter and fellow Gonzaga prep alumnus Todd Steilen, after the Tag Brothers became known nationally following a 2013 profile in the Wall Street Journal by Russell Adams, according to Cinema Blend. All ten also made an appearance on CBS News Sunday Morning later that same year, further detailing their bizarre game.

Given that it's been close to 40 years since the Tag Brothers attended Gonzaga Prep in the early '80s, the group have seen their lives take very different directions in the ensuing decades. As of 2013, Brian Dennehy was chief marketing officer of Nordstrom Inc., according to the Journal (in what appears to be a coincidence, the actor Brian Dennehy appears in the film, playing the father of Jake Johnson's Randy "Chilli" Cilliano, who appears to be somewhat based on Joey "Beef" Caferro).

As for the others' real life jobs, they're pretty diverse, according to their CBS News appearance. As of 2013, Sean Raftis was a Catholic priest based in Montana, Joey Tombari was a math teacher at their alma mater Gonzaga prep, and Patrick Schultheis was a lawyer. It was Schultheis who came up with the rules governing their annual game, and he's also the one who was tagged at his father's funeral, a scene mimicked in the movie ("Beef" did the deed in real life, "Chilli" gets the honors on screen). Reader's Digest's Brandon Spektor also did a profile on the group, where he revealed more of their professions. At the time, Mike Konesky was a technology executive, Bill Akers a healthcare executive, Chris Ammann a financial services professional, Rick Bruya a recreation coordinator, Mark Mengert a machine shop owner, and Beef? He was an aerospace engineer.

The fact that ten adults with professional careers are able to put their lives on hold to come together every year to play a children's game is pretty amazing, and it certainly makes the true story behind the movie Tag even more unbelievable than the film itself.

Oh, and in case you're wondering, Bill Akers is currently "it," according to The Spokesman-Review.