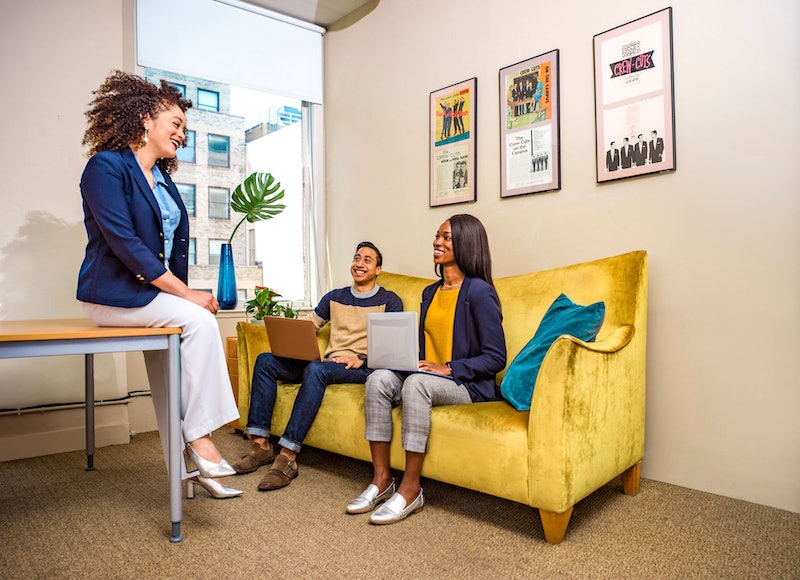 The number of people forced to live long-term in private rented housing has risen exponentially in the past decade, due mainly to the uncertain economic climate. Renting woes are, by now, frighteningly familiar to most of us. Dodgy landlords, nightmare flatmates, and overpriced and unsafe accommodation all characterise a very broken system. It's no wonder that a 2018 study from The University of Stirling found that renting is negatively impacting young people’s mental health. But when we talk about ‘generation rent’ in this country, there's a tendency to homogenise and overlook the specific housing issues that people of colour face. That can be dangerous, because often, those of minority backgrounds are disproportionately affected by housing issues.

Discrimination has been coded into the structure of the housing market since the notorious "no coloureds" and "no blacks, no dogs, no Irish" signs of the 1960s. According to Rights Info, in 1968, Mahesh Upadhyaya became the first person in the UK to bring a racial discrimination case to court using the newly introduced Race Relations Act. Upadhyaya eventually lost the case on a technicality, but the judge at the time ruled that discrimination had occurred, and this was ultimately the first step in eradicating some of the overt racism within the housing market. But of course, it still exists. As the Independent reports, in 2017, one of the UK's biggest landlords, Fergus Wilson was exposed for saying that he wouldn't rent to "coloured people" because of "the curry smell at the end of the tenancy.” Although it's illegal to discriminate on the basis of race when renting, the UK offers little in the way of renting regulations, meaning that this type of discrimination can still go unchecked.

As the BBC reports, a high court ruling in March 2019 determined that the legislation around 'Right To Rent' violated human rights as it perpetuated prejudice in the housing market. The government scheme, which was introduced in 2016, demanded that landlords check the immigration status of all tenants, with fines of up to £3,000 and a potential prison term if they failed to do so. Critics pointed out that it exacerbated the already hostile environment that many immigrants and PoC face by turning landlords into untrained and unwilling border guards.

On a micro-level, racism within house-shares and between house-mates, is also a huge issue. The UK's cities are fairly diverse — fewer than half of all people in the capital are white, and other cities like Manchester, Birmingham, and Liverpool have long histories of migration from different parts of the country and the rest of world. But even in these cultural melting pots, there are many young people of minority backgrounds sharing their living space white people a difficult experience.

Nina, 36, is a fashion stylist who moved from Leeds to London 13 years ago. She says that all her house-shares have been with white people, which has been difficult at times. "Being the only woman of colour in a white house affects certain things from day to day; the things you talk about, the TV you watch, how comfortable you feel having your hair on show — all of that," she explains. "I have had housemates who are very ignorant. With one guy it was clear very early on that his privilege was ingrained. He was very middle class, had been in the army, and had studied at Oxford. He wasn't used to being around different types of people. I remember how once how he said that 'the n word is just a word' and proceeded to tell me that black people were too sensitive. I just thought 'I need to leave the room' because I was so uncomfortable."

Amira, 25 had a similar experience in a house-share in Hackney, two years ago. She moved into a house with a white couple who started off friendly enough, but soon began to make racist jokes at her expense, defending their behaviour as "banter". Amira felt trapped and anxious, but didn't know who to turn to. "Who do you call on when your house-mates are treating you like that? I had no-one and my family live really far away. I was with this couple who made me feel like I was always under a microscope. Everything I did was ridiculed or commented upon as something odd or different. If I cooked spicy foods in the kitchen it was a big deal, if I wore certain clothes or did my makeup a certain way, they made jokes. I was even compared to their pet dog as apparently the colour of my hair matched the dogs' fur. It was weird and I constantly felt 'othered'." Amira moved out after six months.

Research from YouGov in 2018 found that one in three white Britons (35%) have no friends from an ethnic minority background. And many renters feel the weight of these divisions acutely, turning to renting apps and Facebook groups that connect PoC with one another such as Bun Babylon and POC Housing In London. The most popular SpareRoom, the UK's largest searching site, doesn't allow you to filter flatmates by ethnicity or background. Oyin, 24, said she used the group Bun Babylon to find a flat after realising SpareRoom wasn't for her. "I'd heard some horror stories - not just the usual sort, but ones related to race. I decided I wanted to eliminate that from my renting experience so I only looked at flats in PoC housing groups" she explains. "If your living environment is off-kilter, then it affects the rest of your life and I knew that had to surround myself with people who make me feel comfortable. I didn't want to feel like I couldn't be myself in my own home, and unfortunately, that can come with living amongst ignorant, close-minded people who are of a different background to you".

The general discourse around renting in Britain is that it's similarly awful for all involved — but not all renting situations are made equal. For many PoC, there's a whole host of additional race-related issues to contend with alongside the usual dramas. The choice to live apart from white people is borne of necessity — having faced so much exclusion and discrimination over the years in the housing market, many feel that it's simply easier to live with those of similar backgrounds. If things are going to improve when it comes to renting in the UK, as well as an overhaul of the whole system, we also need to have greater protection and more regulation for the country's most marginalised groups.

This article was originally published on June 17, 2019