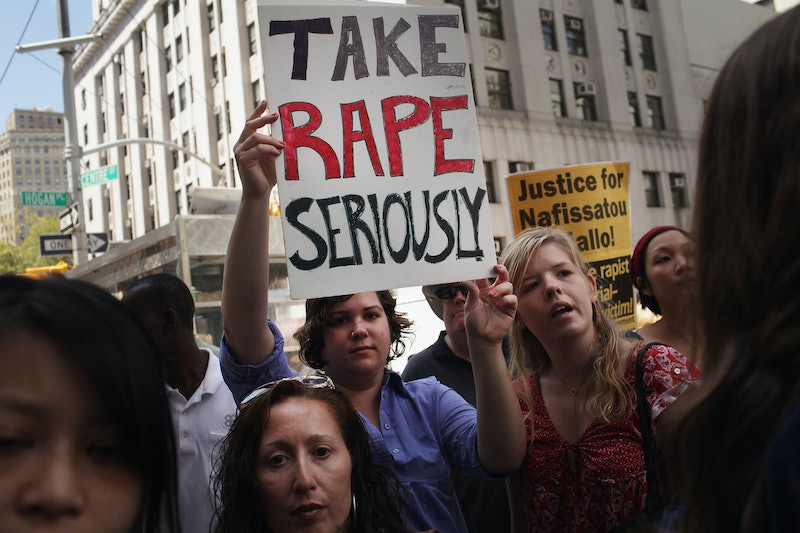 A big misconception about sexual assault and sexual assault survivors is that fighting back is the “normal” and “natural” response to such a brutal, traumatic event. But many survivors don’t fight off their attackers, or put up much resistance at all — and one reason they don’t fight back may be because they can’t, according to a new study in the journal Acta Obstetrica et Gynecologica Scandinavica. Researchers in Sweden surveyed nearly 300 women, who were visiting an emergency clinic for survivors, about their assault. About 70 percent of those surveyed reported experiencing some degree of “tonic immobility,” or an involuntary, temporary paralysis during the attack.

“Active resistance among rape victims is something that, for example media (movies etc), has made us believe [is normal],” study author Anna Möller told Bustle in an email. But her study should help debunk that myth.

Though it seems counterintuitive, this response is an evolutionary adaptation to a stressful event. Scientists have noted that many animals have the same response when they’re attacked by a predator and can’t get away. It may be that not resisting, or even “playing dead,” may deter predators, or cause them to lower their concentration and leave an opening for escape.

"[A] lot of the people that I treat, who had what I assume was tonic immobility during a rape, experience huge levels of guilt, because they don’t understand why they didn’t move."

Michelle Bovin, a psychologist at the Veteran’s Association National Center for PTSD, says it’s unclear if the experience of tonic immobility itself was what raised the risk for developing PTSD. (Bovin was not involved in the study.)

But feeling paralyzed during an assault is terrifying in and of itself, Bovin said.

“You can’t move, you know this horrible thing is happening to you, and you don’t know why,” she told Bustle. “So a lot of the people that I treat, who had what I assume was tonic immobility during a rape, experience huge levels of guilt, because they don’t understand why they didn’t move.”

Tonic immobility is involuntary, so anyone who has experienced it should not blame themselves for not fighting back.

Unfortunately, if sexual assault survivors choose to bring their case to court, not having fought back and showing no physical signs of resistance is often used against them, and presented as a sign that they were not "really" assaulted.

“I think it requires a little more nuanced thinking to realize that there’s no one ‘right way’ to respond to a rape,” Bovin said. “Our bodies may have other ways of dealing with them. Unfortunately, that makes it difficult to prove when someone is assaulted, but that does remind us that just because somebody didn’t fight back doesn’t mean that they didn’t have a horrific rape happen.”

Still, the study did have some shortcomings. Of all the women asked to take the survey, only about a third of them agreed. And only two thirds of that group (about 200 survivors) participated in the follow-up survey about PTSD and depression. So it’s possible that the researchers did not get a representative sample of all rape survivors; we’ll never know how people who didn’t come to the clinic after their attack, or who chose not to participate in the survey, fared.

But the study should hopefully show that there’s no clear “natural” response to the trauma of rape and sexual assault — and prove, once and for all, that not resisting does not imply consent.