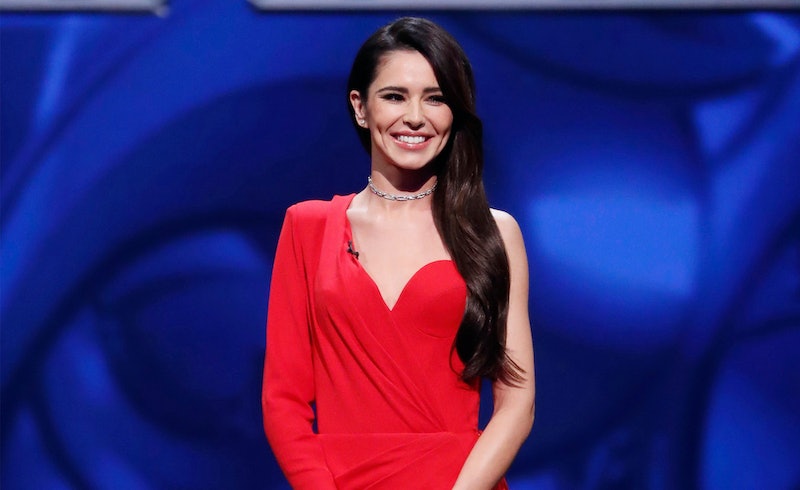 Last night’s event at the London Palladium was a star-studded one, as celebs turned out in droves to both celebrate Prince Charles’ 70th birthday and support The Prince’s Trust — the royal’s charity in aid of disadvantaged young people. One of the faces in the crowd was singer Cheryl, who’s thankfully making a comeback ATM and she came dressed ready to steal the show. She stepped out in a gorgeous asymmetric piece, and Cheryl’s red dress at Prince Charles’ birthday has had me obsessed since the moment I laid eyes on it.

Cheryl’s basically living everybody’s IRL post-break up fantasy, as she well and truly glowed up last night in an all-red look. The cherry red Ulyanka Sergeenko dress featured an asymmetrical sleeve detail and thigh-high slit. The brand was so chuffed that they dubbed her their "lady in red" on Instagram, as well as sharing a few snaps of her. Cheryl paired the stunner with some chunky heels and a mani-pedi in the same shade. The Geordie singer also hopped on one of my favourite new jewellery trends for the winter season, a chain-link necklace, and she basically cemented the fact I need to get one ASAP.

The singer and Prince Charles actually go way back, as Cheryl has actually been pretty involved with the Prince’s Trust in the past. She has her own foundation, aptly named Cheryl’s Trust, and she collaborated with Prince Charles’ in a campaign to aid “young people in the Newcastle region.”

She said of the joint effort, "The young people The Prince's Trust works with, day in day out.. .are often already resigned to the belief they will fail in life. That’s why I am raising money to open the new Centre here in Newcastle. I want to give back and help young people who feel like they’ll never achieve anything reach their dreams and live a happy life."

Cheryl was photographed shaking hands with the very pleased-looking royal — I mean seriously, look at his grin matched with her bashful glance — completely upstaging the birthday celebrant in her scarlet dress. If you’re keen on grabbing a similar look but don’t want to pay the luxury bill, there's a few high street pieces out there that fit a similar bill. Whether you're looking to make a major statement or looking for the ultimate revenge dress, I'd grab one of these.

One shoulder? Check. Thigh-high slit? Check. Bold red shade? Check. Unlike Cheryl's more structured dress, this is going to cling a little more to your curves thanks to the slinkier fabric.

Need a reason to go clubbing? This shorter one-shoulder dress is it and plus, it'll only set you back a tenner.

This dress is currently one of the most popular ones on PLT's site and with good reason. With a shorter length and very Christmas-appropriate sparkle, this is a dress that'll see you through party season.

Featuring a more structured shoulder and parent-appropriate hemline, this is absolutely a dress I'm dying for Meghan Markle to wear at a more glam event.

Not feeling the full length sleeve? Missguided has put their own spin on the dress with a maxi that channels a similar spirit.