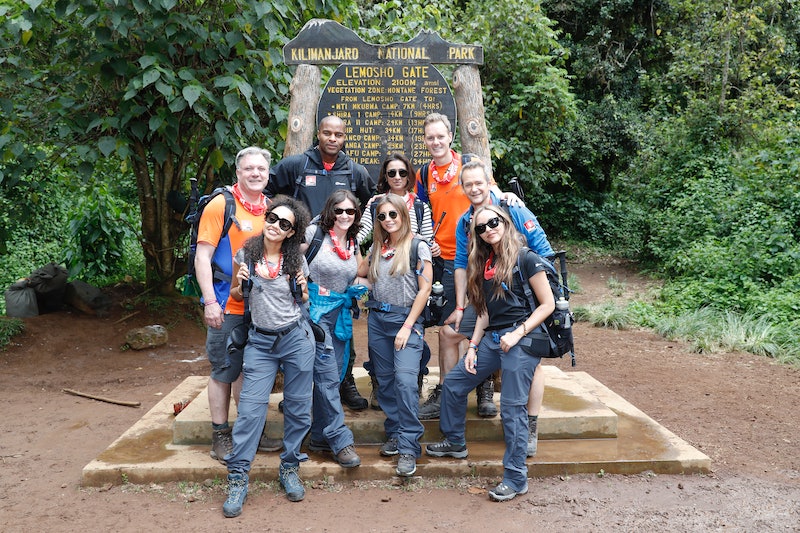 Back in 2009 a group of celebs attempted to climb Kilimanjaro, Africa's tallest mountain. With the likes of Fearne Cotton, Cheryl Cole, Chris Moyles and Alesha Dixon on board, this was a seriously A-list climbing team. It was all done aid of Comic Relief, and in 2019, the challenge has been attempted again by a new set of celebs. The climb took an extreme toll on those brave enough to face it, and this is the Red Nose Day Kilimanjaro Climb 2019 route, just so you can really appreciate what these celebs put themselves through.

A great mix — or rather, a Little Mix — of celebs took on the unthinkably intense challenge, including Jade Thirwall and Leigh-Ann Pinnock, former MP Ed Balls, Love Island's Dani Dyer, and Pointless host Alexander Armstrong. You'll get to see how they fared on Thursday, March 14, when Kilimanjaro: The Return airs as a one hour documentary on BBC One.

However, you can be assured that all of the celebs made it up to the top safely, as the official Kilimanjaro: The Return site kept viewers back at home informed of the celebs' safety with daily updates.

It took the celebs just eight days to climb Kilimanjaro's 5,895 metre summit. They began their climb on Feb. 23 at Kilimanjaro national park, from there they spent their first night in a forest camp, before reaching heights of up to 3,700 metres on day two, where they pitched up for the night on Shira 1 Camp Gate. Day three saw them scaling around 400 metres, before they caught a quick rest at Moir Camp 4,100 metres up. They took a bit of a dip on day four, traversing up and down the mountain before settling in Pofu Camp, which lies a bit further down from their previous stop.

Day five also saw the celebs going through a series of peaks and troughs, before they nestled for the night 3,915 metres up at Cave 3 Camp. Then came the serious nitty gritty. They began a steep uphill battle on day six, as they climbed up almost 1,000 metres to their next camp at School Hut. But even that wasn't the worst of it.

The final day was by far the celebs' hardest. They struggled up the extremely sharp ascent from their previous camp to the summit, which involved a climb of over 1,000 metres. While there was a pause for celebration and picture opportunities as they reached the top on March 2 , they then had to put in one last valiant effort, as they traversed down the mountain towards their final stop at Horombo Hut, 3,706 metres up from their starting base.

On their final day, they got back to the bottom with a huge sense of relief, and inconceivable pride. What they'd just achieved would have been a genuine challenge for even the most experienced of climbers, but these novice climbers smashed it. It's not quite enough to make me want to attempt the same, but it's at least inspiring enough to make me want to do a 5K run the next day (which I probably still won't do tbh).