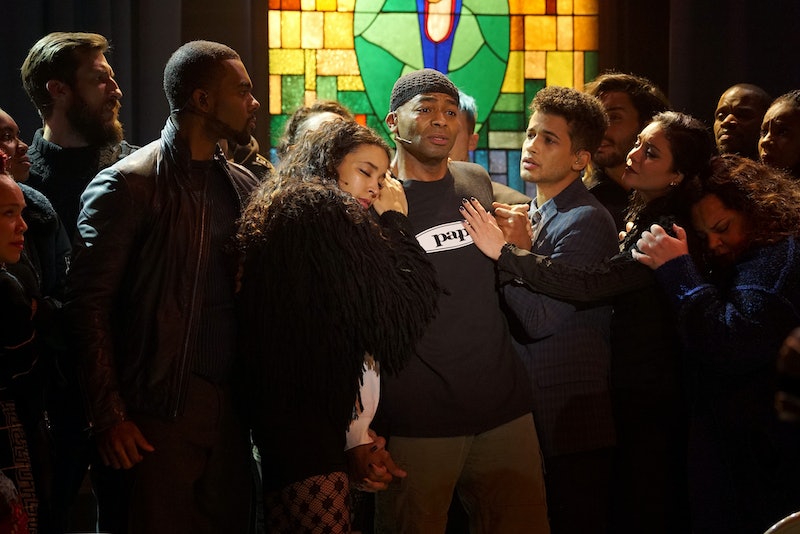 Rent has lots of tear-jerking moments, but one song has a real power to bring the emotional heat. Brandon Victor Dixon's reprise of "I'll Cover You" in Rent Live had everyone crying — even the cast onstage.

The reprise, which takes place in the second act during Angel's funeral, is devastating. You may think that nobody could touch original cast member Jesse L. Martin's soulful serenade to Angel's memory — but Brandon Victor Dixon killed it during the FOX event. Angel and Collins' love story may be a short-lived one given that they barely knew each other for a year before Angel lost his battle with HIV/AIDS. However, this song proves that "love is worth the cost," according to Dixon himself in an interview with TVLine.

“I’ve had to focus deeply on the words and why I’m saying it,” he said. “It’s really when he returns to that phrase ‘I have longed to discover something as true as this is.’ There’s a certain choice of words there. The longing. The discovery. Not just ‘find.’ Not just ‘have.’ 'Discover.'”

Dixon, a Broadway veteran himself, previously blew audiences away in Jesus Christ Superstar! Live in 2018. He is a three time Tony nominee, with one win in 2014. His New York stage credits include: Shuffle Along, Or The Making of the Musical Sensation of 1921 and All That Followed; The Color Purple; Hedwig and the Angry Inch; Of Mice and Men; Motown: The Musical; and a little show called Hamilton. Dixon was Leslie Odom Jr.'s replacement in the roll of Aaron Burr.

The best kind of reprises in musicals, in this writer's humble opinion, are the ones that take a recognizable melody and turn it into a gut punch. Like how by the end of "Do You Wanna Build A Snowman," in Frozen, that childlike request becomes the saddest thing you've ever heard. "I'll Cover You" is a classic example of that. The first time Angel and Collins sing this song, it's a playful celebration of new love. Angel is the one taking care of Collins. Now, the second time around, Angel is gone and Collins is left to pick up the pieces for his friends.

As for Dixon's performance, here are some of the choice reactions:

Whoa! That's one heck of a take.

"It’s personally going through acknowledging the love you have," said Dixon in the same TVLine interview, "thanking your love for the love given and the lessons given, and then looking at the people who are with you still and reminding them of the lesson and telling them that it is worth the cost.”

When the Rent Live soundtrack is downloaded onto your various devices — a phrase that all of the characters in Rent would find totally baffling — the "I'll Cover You (Reprise)" is definitely a track you'll have on repeat, whether you're looking to have a good cry or just want to remember this iconic performance. Rent Live was a bit of a rollercoaster, but we'll always have this.