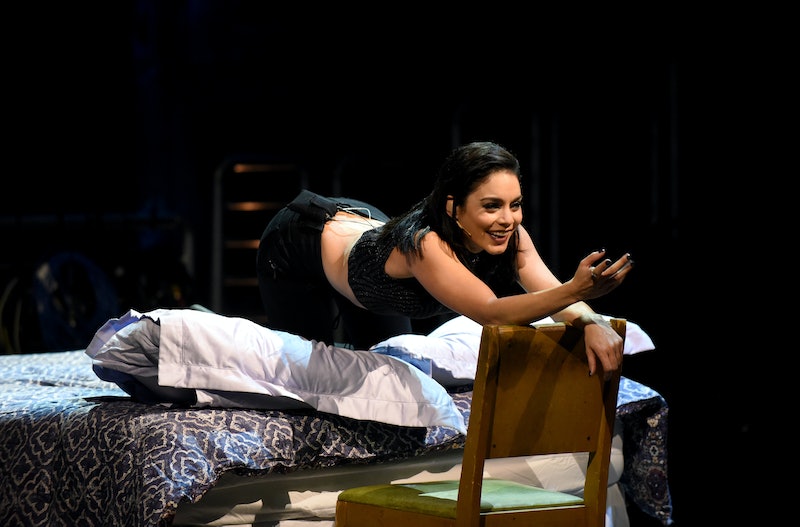 Rent super fans knew that there would be some changes in FOX's Rent Live, but that doesn't stop Twitter from commenting on the accommodations the show had to make to air on primetime network television. In fact, some of the lyric changes in Rent: Live on Sunday were pretty ridiculous. Really — of all the risqué themes in the show, changing the lyric "poo-poo" to "reject it" seems pretty silly.

Some of the lyric changes, probably most of them, were for language — the early time slot on primetime is not exactly FCC friendly. There aren't a lot of swear words and sexual references, but there are a few. I'm not surprised that "The Clit Club" was changed to "Pandora's Box" in the scene before "Take Me Or Leave Me." Then again, some of them are a little confusing. For example, they kept in "f*ggot" in "La Vie Boheme" — but "Hicksville" was changed to "Jersey" in "Happy New Year." Also, Alexi Darling's confusing email address was cut off earlier than ever before? Whatever, honestly.

Part of Rent's enduring legacy is that it shook up the squeaky clean expectations that come with musical theatre. The language is explicit. The themes are mature and often dark. We're talking about sex, drugs, poverty, and HIV/AIDs here. Things get explicit. Maybe it shouldn't have been on primetime television in the first place, if this much had to be changed.

Seemingly other lines and lyrics have been changed just for fun, or to make the show more accessible for a new television audience. This was an opportunity to tweak the show a bit, give it a little punch up. There's also a moment during Angel's funeral in the stage show in which Mark refers to her as a drag queen that was removed — that I think was an effort to not conflate drag with gender identity, not censorship.

Fans will notice that there is overall more dialogue and narration from Mark and some of the other characters — Spring and Summer definitely get more focus as seasons in this production. It's not as cringeworthy as the film adaptation (in my opinion, that is) that just had characters speak the rhyming lyrics as though they were dialogue, but it is new.

That said, like it or hate it, fans of the show will notice instantly and will tweet about it. Here are some reactions:

Personally, I think "poo poo it" is a bad forced rhyme and I'm glad they changed it, but that's just my opinion.

I mean yeah... when you put it that way it doesn't make a lot of sense.

We'll always have our couches.

Then again, audience members who aren't familiar with the stage show at all are in for a whole other journey of discovery, especially when it comes to "Contact," as well as Joanne and Maureen's whole relationship.

When this is all said and done, we're really going to need to do a deep analysis of all the different lyrics that were changed and why. Because it really didn't seem to make any sense at all.