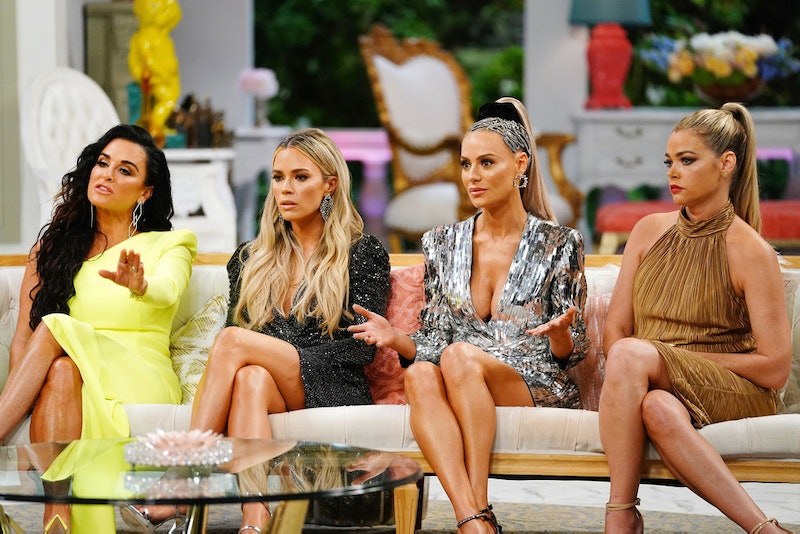 Even though Lisa Vanderpump skipped out on filming the Real Housewives of Beverly Hills Season 9 reunion, she was a hot topic of conversation, especially during the first few minutes. Andy Cohen and the RHOBH cast discussed Lisa's reunion absence and they did not mince their words.

Andy didn't waste any time addressing the elephant in the room. He couldn't help comparing it to Adrienne Maloof's absence during the Season 3 reunion taping. In a flashback clip from that moment, Lisa said, "I think if you sign up to do a reality show, you have to be prepared to open up your life."

In that same clip, Andy asked the ladies, "Is it cowardly not coming today?" Season 3 Lisa adamantly (and ironically) declared, "I think it's a mistake as well because I think she's leaked stories to the press saying that she wanted to quit and I don't believe that. I believe she wanted to stay and I think she should have come, cleared up the mess, and moved on." It's almost creepy how similar that is to LVP's current situation.

It was clear that it her absence was a surprise — they even had a dressing room saved for her. Andy greeted the group saying, "Obviously, someone is missing today. Lisa Vanderpump told a reporter yesterday that she won't be attending the reunion and also that she won't be returning as a Housewife next season."

Kyle Richards theorized, "I think she gave that interview yesterday so that she could say she quit because she knew that if she didn't show up today that you would probably do the same thing that you had to do with Adrienne and fire her. So, she was preempting 'getting fired' by saying she quit yesterday." If only Lisa was there to share her side of the story.

Andy asked Dorit Kemsley what she thought about Lisa's accusations that the cast "harassed" her for ten months. In response, Dorit rhetorically asked, "How do you harass someone that you've had no contact with whatsoever?

Then, the host read an excerpt from a Radar Online (imagine that!) article where "an inside source" claimed that Lisa was "being burned at the stake, nailed to the cross, and stoned by her co-stars." Erika Jayne had a very concise response to this source, "Get off the cross. We need the wood." Clearly, she's not super emotional over LVP's absence.

When Andy quoted an anonymous source who proclaimed that "Lisa always wins," he asked Kyle if she was "winning" by skipping the reunion. Kyle told him, "No, I really think it was a big mistake not to be here today. If she had been here today, we would have all tried to work through it, even if it meant agreeing to disagree."

Instead of commenting on Lisa's absence, Teddi Mellencamp Arroyave admitted that she was in disbelief. She shared, "I still feel like there's a chance that she will show up. I can't imagine that she won't show up for some sort of dramatics or something." At another point, Erika shared very similar sentiments, "I'm expecting a stunt of the most dramatic proportions. I will be fully disappointed if that doesn't happen."

Well, then, it sounds like Erika (and many viewers) will be fully disappointed by the reunion's conclusion. There have been zero reports about Lisa making a surprise cameo appearance or making a phone call during filming so it will likely not happen.

Even with all the discord between them, the other Beverly Hills Housewives, Andy, and a lot of the viewers wanted to see Lisa come through and talk things out with the group. Even in her absence, Lisa managed to steal the show.