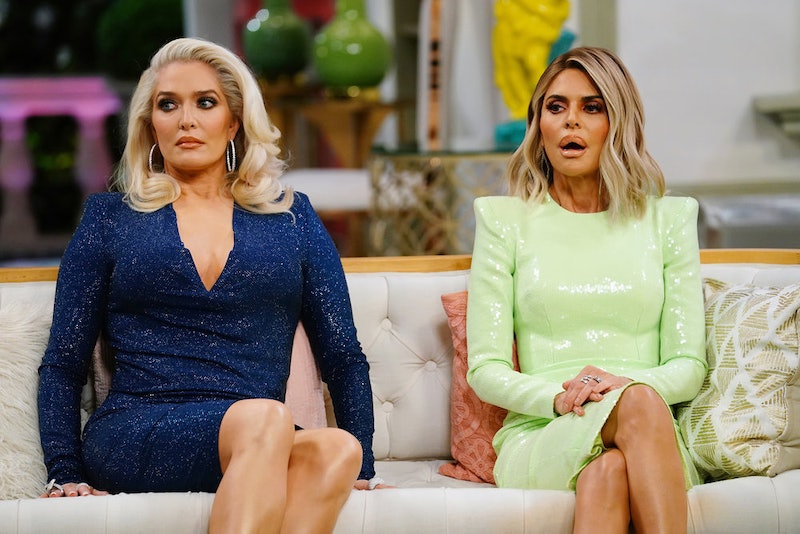 A day has come that many Real Housewives Of Beverly Hills fans never thought they'd see — Lisa Vanderpump has quit the show. The OG maven of RHOBH has called it quits, and that mean Lisa Vanderpump skipped the Real Housewives Of Beverly Hills Season 9 reunion, too. And the reason that Lisa didn't come to the reunion? Well, it all stems from a little dog and some serious allegations from the other women on the show. Drama, drama, drama.

Season 9 started with the tale of one little dog — Lucy Lucy Apple Juice (Dorit's kids named the dog, so don't at me). Dorit adopted the dog from Vanderpump Dogs, Dorit didn't want the dog, Dorit gave the dog to someone else instead of giving it back to Vanderpump Dogs (which is a no-no). This would have been fine, but allegedly Lisa Vanderpump set up Teddi to make this a plot line to take Dorit down in Season 9, and finally, everyone had enough of Lisa Vanderpump's behind-the-scenes machinations.

There was a lie detector test. There was Ken, Lisa Vanderpump's husband, screaming at Kyle Richards while she wore a very big burgundy fedora. And finally, there was no more LVP, because she had opted out of filming anything — no episodes, no reunions, nothing. Ta ta, darling.

If you listen to the other women on the show, they reportedly just wanted Lisa to own up to the fact that she liked to work behind the scenes to make herself smell like roses. That's kind of what happens on reality TV, so none of it would have been a shock. But Lisa was too proud and likened how she was treated to bullying. "When you are a woman of integrity, and you're a woman that works really hard and is very compassionate, and is very principally minded, and they keep coming at you and ganging up on you, I don't know," Lisa told Entertainment Tonight.

"I didn't integrate with the other women after they constantly called me a liar." Thus, Lisa completely stopped filming Real Housewives Of Beverly Hills, and yes, that included the reunion, because she didn't want to be targeted by the women again. In a tweet, LVP said there was "no chance" she'd show up.

If you ask Andy Cohen, Lisa's opting out of the reunion was a missed opportunity. "I'm not going to do a Lisa rebuttal show,” he told Vulture. “Her time to say her peace was at the reunion, and she gave up that opportunity.” Damn, man. Luann gets her own specials and LVP does not.

But don't worry, LVP fans — there's always more. You'll see her face on the network onVanderpump Rules, and there's a rumored Vanderpump Dogs spinoff in the works, too. As Andy Cohen said on his radio show, "We will continue to see more of Lisa in all of her glory on Vanderpump Rules... the door will always be open to Lisa as it is when people leave the show.” If RHOBH fans know LVP, she always has another show up her sleeve — this isn't the end.