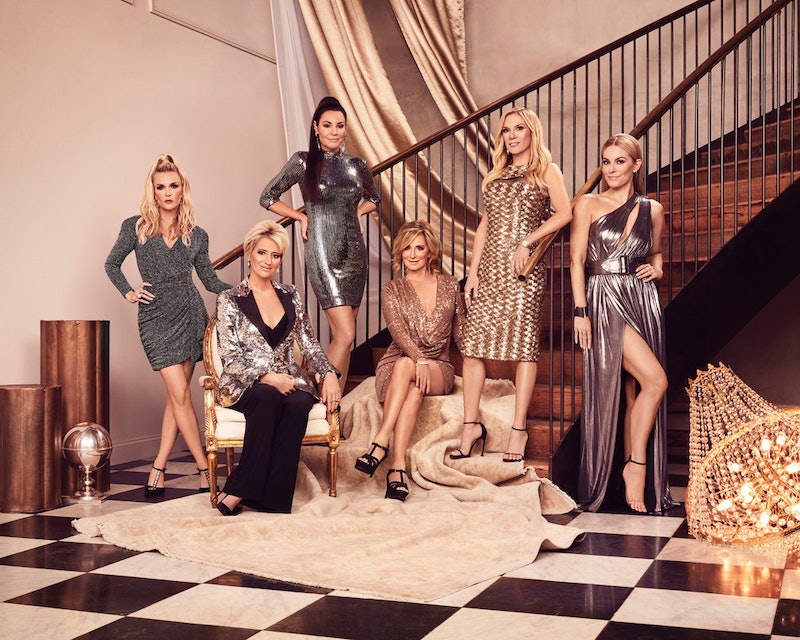 The housewives of the Big Apple are once again returning to Bravo, and, as new housewife, Leah McSweeney, says, they're back to being "hot f*cking messes." The Real Housewives of New York City Season 12 trailer introduces Leah to her fellow co-stars. She joins the season in a full-time role, alongside Luann de Lesseps, Ramona Singer, Sonja Morgan, Dorinda Medley, and Tinsley Mortimer. And based on the teaser, Leah is going to fit right in with the ladies.

Leah is a New Yorker at heart, the founder of Married to the Mob, a streetwear brand for women, and a mother to 12-year-old Kier, aka Kiki. And thanks to her longtime friend Tinsley, she's is now part of this very vocal and never-boring group of women.

Despite Leah telling Luann in the trailer that she and the rest of the women are "hot f*cking messes," it seems like she's exactly where she belongs. "I like crazy people," she says in the clip. Later, the over-the-top antics and drama seem second nature to her, like when Leah's seen chasing Sonja around a pool naked, making out with Tinsley, and ripping a lobster apart while dressed in costume. Per Sonja, Leah is "kind of rough on the edges."

Leah was confirmed as the newest Housewife in November of 2019 during a panel at BravoCon. While chatting with People in January, Luann praised her new co-star, saying, "And what I like about her is she is somebody who is self-made and vulnerable at the same time."

It always takes time to warm up to new Housewives, especially when they're following in the footsteps of Bethenny Frankel, who left RHONY after Season 11. RHONY will certainly be different without her, but based on the clip, it looks like Leah will be able to fill her "crazy" shoes.