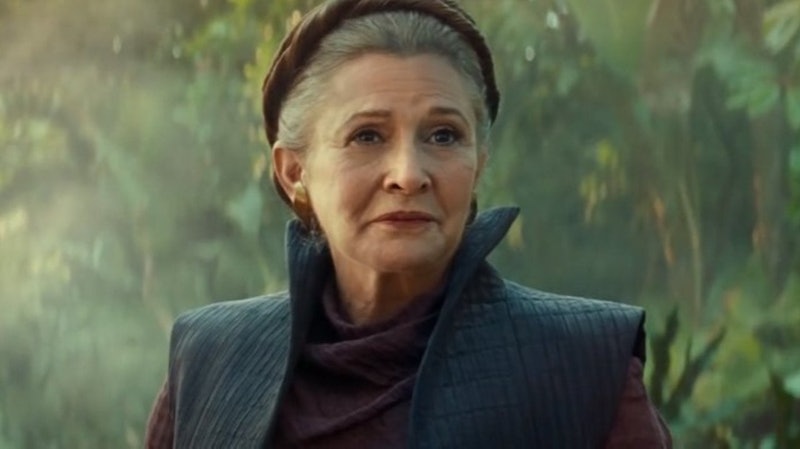 Though she's as much a Skywalker as Luke and Anakin, through the decades Star Wars fans thought of Leia as a diplomat, a general, and a princess, but not a Jedi. Not that it's fans' fault — up until the quite-recent Last Jedi, she never really flexed her Force powers. But The Rise of Skywalker reveals that Leia has been a Master Jedi all along; it just took a back seat to running the Resistance for her.

For anyone questioning whether Leia was a a full-fledged Jedi Master, Rise of the Skywalker is a treasure trove of proof. Leia's taken on an apprentice, training Rey after Luke's death as a Master. She can manipulate minds, reaching out to her son Kylo Ren after sensing he needed her. She's even passed one of the three major trials of a Jedi — assembling her own lightsaber.

We've known Leia had Force abilities since the original trilogy. In The Empire Strikes Back, the spirit of Obi Wan tells Yoda, "That boy is our only hope," to which Yoda replies, "No. There is another." It's pretty clear that Yoda was referring to Leia as the other possible hope, but with Luke training in the ways of the Jedi and ultimately facing Darth Vader, Leia didn't have to. Instead, she concentrated her efforts on organizing rebellions against the Empire.

Even Luke understood the score. In Return of the Jedi, he told her in the event of his death, she's the only hope for the Alliance. And when Leia denied her abilities, Luke told her straight up, "You're wrong, Leia. You have that power too. In time you'll learn to use it as I have. The Force is strong in my family. My father has it, I have it, and my sister has it." A moment later she's already using it when she admits she's always known their bond. Call it what you want — intuition, a sense, a feeling — when you've got the Force, you just know.

The Rise of Skywalker has Leia guiding Rey's training, and after she dies, Rey inherits her lightsaber. You may wonder why Leia never broke it out in battle, but for many Jedi after the Clone Wars Order 66 slaughter, and following the rise of the First Order, it might've seemed more prudent to hide her Jedi nature and avoid being hunted, than wield it outright. There's also a long history of Jedi who just didn't use lightsabers voluntarily, and in The Force Awakens, Leia's role was as leader, not warrior.

Her Force powers were indisputable after The Last Jedi though, when she was blasted into the cold waste of space, and by sheer instinct guided herself back to safety. In Star Wars: Galaxy’s Edge – Black Spire, a canon book following Last Jedi, it's even addressed why Leia never used the Force before — her mastery over it was so great she actively suppressed it to avoid accidentally influencing the democratic process. While that seems like a bit of a stretch, the key point is there's no doubt Leia could and did use the Force when necessary.

Her last act in life was using the Force to both sense and shift the balance of the universe. By knowing exactly when to reach out to her son Kylo Ren, then in the middle of battling Rey, Leia set up the chain of events that would tip Kylo Ren into becoming Ben Solo again. At the end of The Rise of Skywalker, Rey buries Luke and Leia's lightsabers together, a final acknowledgement of the twin Jedi whose powers guided the galaxy towards good.