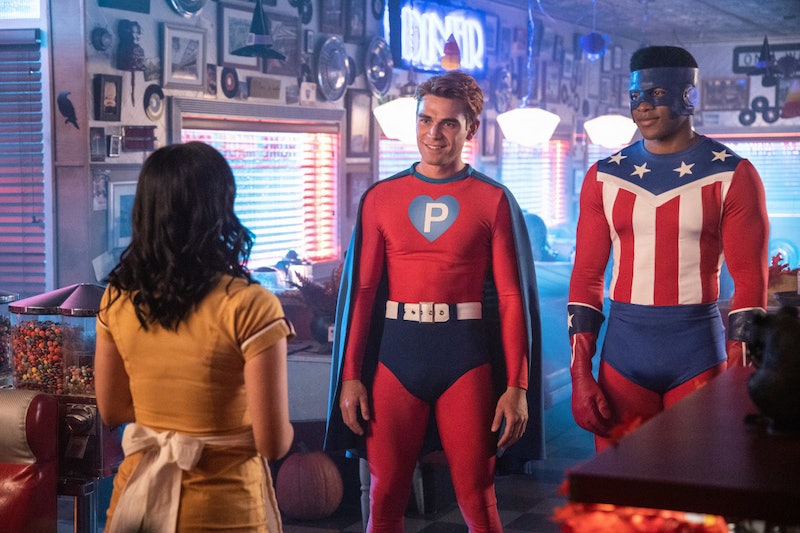 Spoilers ahead for Episode 4 of Riverdale Season 4. It's heroes versus villains on Riverdale this Halloween. In the Oct. 30 episode, Archie and the gang get costumes courtesy of Veronica's good friend Katy Keane (no doubt a set-up for the upcoming Katy Keane spinoff). They all dress up as comic characters, but unless you're really up on your Archie comics history, some may be easier to figure out than others.

Archie, ever the protector, goes as a superhero, but not one in the DC or Marvel universe. He dresses as "Pureheart the Powerful," the superhero name that Jughead came up with for him in Season 2, and a reference to the original Archie comics. As noted by Comic Book Resources, Pureheart is Archie's alter ego. It was initially meant as a brief storyline: when Archie invoked the "PH Factor" (or "Pure Heart" factor) in 1965's Life With Archie #42, he was given special abilities. But after he saved the day, they were revoked and his memory was wiped. However, the concept turned out to be so popular that Pureheart the Powerful eventually got his own comic.

In Riverdale, Archie's costume is complemented by Mad Dog as The Shield, another Archie comics character who later crossed over to the DC comics in a different iteration.

Toni and Cheryl, meanwhile, take a more villainous (and commercial) route, dressing as Poison Ivy and Harley Quinn from DC's Batman. Not only are the characters popular Halloween looks, but they're a popular 'ship in the comics. So it's kind of the perfect couples costume — and the perfect nod to the CW's DC shows. (They really packed in the self-promo this week).

Lastly, Betty breaks up the comics theme by going as Jamie Lee Curtis' character from the Halloween movies, Laurie Strode, and Jughead's sister Jellybean dresses up as Rosie the Riveter.

Everyone else in Riverdale didn't really have time for Halloween costumes. Veronica is wrapped up at Pop's diner, facing off with a serial killer called "the Family Man" who just happens to be passing through town (likely another comics nod, as a similar character appeared in the Hellblazer series.) Kevin and Reggie opt for the "mischief night" approach to Halloween and pull pranks around Riverdale High. And Jughead is a little too busy over at Stonewall Prep after getting locked in a coffin to put on a costume (not that he would have bothered anyway).

All in all, everyone's costumes are pretty on-brand. Next week, they'll be back to their usual mystery-building, but Riverdale is already pretty spooky; it kind of always feels like Halloween.