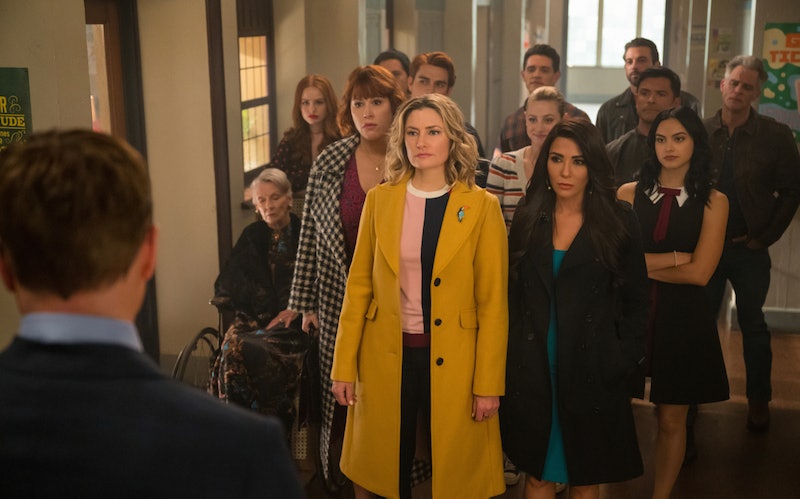 Warning: spoilers ahead for the Season 4 finale of Riverdale. Riverdale fans may have to wait until Season 5 to find out who's sending all those creepy videotapes, but star Mädchen Amick teases it will be worth it. "I kind of heard some behind the scenes rumors, [and I] think I may know who's behind it. It's very juicy," she tells Bustle.

Theories about the tape sender's identity have run the gamut from Charles to Mr. Honey. For a while, Amick even suspected it was Chic, who impersonated her character Alice's son in Season 2. "I figured it was probably somebody in the community [who] was holding some kind of grudge," she said.

The Season 4 finale, which Amick directed, only ramps up the mystery. In the final scene, Jughead and Betty find a new tape depicting a reenactment of them killing Mr. Honey — something Jughead had imagined as part of his university admission essay. Beyond their friends, no one would have known the story, unless someone hacked Jughead's computer. Having the culprit be among their friend group would certainly be "juicy."

Still, this wasn't where the season was meant to end. The show had another three episodes planned that hadn't yet been filmed when production was forced to shut down amid the coronavirus pandemic.

That put extra pressure on Amick, who said she was already nervous to direct a late-season episode because by then, the cast is tired, production is sometimes running behind, and there's pressure to build toward a "big climactic ending." Not to mention that it was her first time directing a TV show after years spent wanting to get behind the camera.

But it worked out in the end. "[Riverdale creator Roberto Aguirre-Sacasa] and everyone felt that [the episode] would be a good way to go out and finish the season," Amick says. "They felt that the storyline lended itself to be a really good cliffhanger."

More like this
Netflix Shut Down 'Bridgerton' S3 Rumours About A “Very Dark” Storyline
By Bustle
'The Queen’s Gambit' Season 2 Tweet Wasn’t From Anya Taylor-Joy
By Mary Kate McGrath, Jack Irvin and Grace Wehniainen
Twitter Simply Couldn’t Cope With The ‘Happy Valley’ Finale
By Sophie McEvoy
Everything To Know About 'RHONY' Season 14
By Jake Viswanath, Alyssa Lapid and Brad Witter
Get Even More From Bustle — Sign Up For The Newsletter
From hair trends to relationship advice, our daily newsletter has everything you need to sound like a person who’s on TikTok, even if you aren’t.