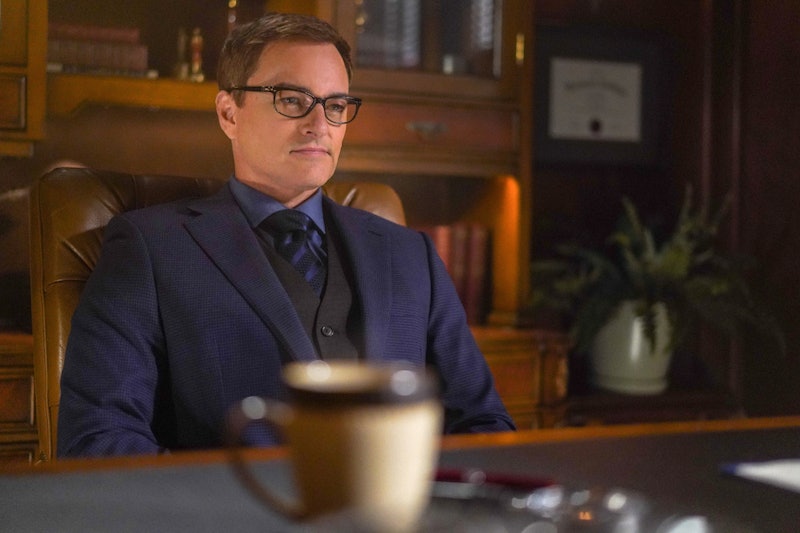 Spoilers ahead for Episode 18 of Riverdale Season 4. Riverdale High's principal Mr. Honey is always preaching about morality (hence why he shut down the school's adaptation of Hedwig and the Angry Inch), but he's not so squeaky clean himself. Apparently, he's a frequent visitor at the local video shop's illicit room of tapes and snuff films. And now, fans are beginning to suspect that Mr. Honey is sending the tapes that keep showing up at everyone's doorsteps.

At first, the videotapes were just static shots of the outside of their recipients' houses — hours of footage to show that they were being watched. But in recent weeks, the tapes' content has escalated into role play. Jughead got a tape that was a reenactment of Betty "killing" him (complete with creepy Betty and Jughead masks). And in the April 29 episode, Cheryl got a tape that was a reenactment of her father killing her brother Jason. Some fans thought it even looked like Mr. Honey may have been playing Clifford Blossom in that dramatization.

Mr. Honey also shut down Kevin's tickling video ring, and Kevin wondered if Terry (the tickling video producer) had told Mr. Honey that Kevin, Reggie, and co. have begun making their own videos. But maybe Mr. Honey knew about the videos because he'd found them himself? He seems to be into some weird stuff.

If Terry did tell Honey, though, then it's possible that the two are working together. Terry has the equipment and the actors to film these tapes, and Honey knows which students he wants to target — like his frequent nemesis Cheryl. Series creator Roberto Aguirre-Sacasa previously described Mr. Honey as "a bit of a hard-ass who takes a harder line with the students this year, especially with the seniors." His fascination with the seniors may have translated into him making videos of all their houses, since pretty much only the seniors have received them.

Whether Mr. Honey is behind the tapes or not, we may be seeing the last of him soon. Next week's finale episode is called "Killing Mr. Honey." The synopsis says it's just a writing exercise in which Riverdale's students imagine killing the man who's ruining their senior year (the University of Iowa wanted a writing sample from Jughead), but perhaps they take the ideas off the page. After all, the promo for the episode shows them standing around his seemingly lifeless body.

It wouldn't be the first time a group of Riverdale students accidentally or on purpose killed their principal. The students' parents killed Principal Featherhead years ago in a Gryphons and Gargoyles game gone wrong. Today's Riverdale High kids could just be bringing things full circle with Mr. Honey — and may be getting rid of a creepy video voyeur in the process.

If Honey does die, his tape collection could be revealed upon his death, or maybe the reason the students kill him is because they find out he's behind the recordings. Either way, Mr. Honey is not as sweet as his name would suggest, and his dirty secrets may not stay hidden for long.