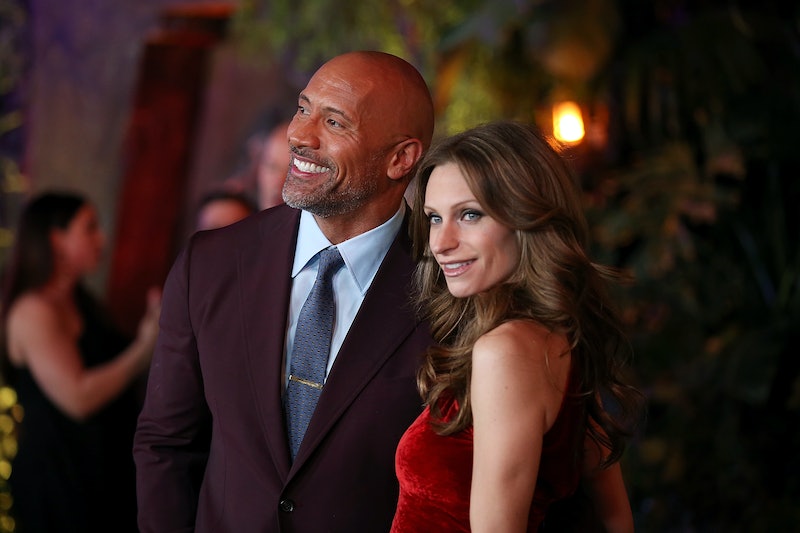 After more than a decade together, this couple has made it official. On Sunday, The Rock and Lauren Hashian got married in Hawaii, and it seems like they couldn't be happier. After all, this has been a long time coming — and even though they have been a pretty private pair, it seems like this milestone is something they were looking forward to sharing with fans.

Dwayne "The Rock" Johnson announced the big news on Instagram Monday morning, along with photos of him and Hashian on the beach in Hawaii, decked out in their wedding attire. "We do. August 18th, 2019. Hawaii. Pōmaikaʻi (blessed)," he wrote in his caption.

So far, he and Hashian have yet to reveal any of the details about their wedding, although judging by the photos, it seems to have been a truly beautiful day. And even though it's not the most shocking thing in the world for two people who have been dating for so long to tie the knot, at the same time, it is surprising because they were never engaged — at least, not as far as fans knew.

But that doesn't seem to matter to Hashian and The Rock, because now, it looks like they're continuing to live happily ever after.

As Hollywood Life reported, The Rock and Hashian met on the set of his movie, The Game Plan, in 2006. Although he was married to Dany Garcia at the time, they split in 2007, and it seems like The Rock and Hashian started dating shortly after. Since then, they've had two children together — Jasmine, who is now three, and Tiana, who is one.

Even though their relationship has been going strong for a very long time, it seems like marriage was never a priority for them to know that they were committed to each other. Hashian has always been a private person, but that doesn't mean that The Rock has kept quiet about what she means to him. On Mother's Day, he posted a photo of her with their daughters, sharing what a great mother he thinks she is.

"Happy Mama’s Day to my incredible woman @laurenhashianofficial who’s the anchor of our blessed family. I always say, if you got a good mom then you have real shot at life to becoming a good human being," he wrote. "As a father and man, I find the greatest peace and gratitude in knowing our baby girls here, Jazzy & Tia have this incredible woman’s motherly love."

And though the wedding itself was a surprise, The Rock and Hashian were actually planning for it to happen for awhile, until she became pregnant with their second daughter, which put their plans on hold, as he told Entertainment Tonight last year.

“We were going to get married in the spring and we got pregnant,” he said. “Lauren felt like, well, you know, mama [doesn’t want] to take pictures being pregnant in a wedding dress, so we’re just going to wait and not quite sure when, but I know it’s going to happen.”

And now that it has, they're finally starting this next chapter of their lives together. Congratulations to the happy couple. Here's hoping they choose to share more photos and details from their wedding day, but if not, it seems safe to assume that this major milestone was worth the wait.