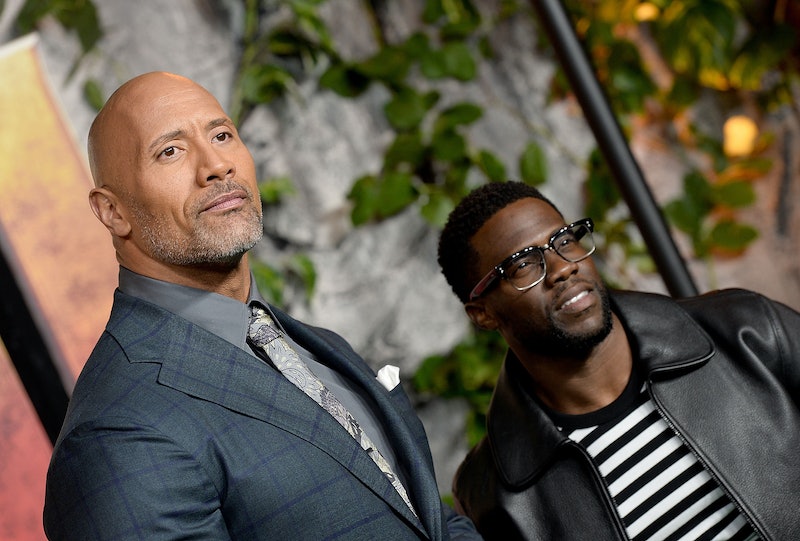 After appearing in more than a few movies together, their on-screen comedic chemistry is hard to ignore. They're not just fictional friends, though — they've formed a tight bond off-screen, too. On Monday, Sept. 2, The Rock responded to Kevin Hart's car accident with an incredibly sweet Instagram post. Despite the fact that he and Hart tend to prefer trolling each other with sarcastic comments on social media, this one was genuinely heartfelt and showed the strength of their brotherly love.

In the early morning hours of Sunday, Sept. 1, TMZ first reported that Hart and his two friends, Jared S. Black and Rebecca Broxterman, were involved in a seriously scary car accident on Mulholland Highway in Malibu, California. While it's not clear what caused the incident to occur, at some point, the car — which reportedly belonged to Hart, but was being driven by Black at the time — veered off the road, crashed through a wooden fence, and landed in a ditch 10 feet from the road.

Luckily, everyone involved walked away alive. Both Black and Hart reportedly "sustained major back injuries," according to E! News, but from the looks of crash photos, it definitely could have been way worse.

It seems as if the whole thing really gave Dwayne "The Rock" Johnson quite a scare, and it's easy to see why. Shortly after news of the accident broke, he shared a supportive message about his famous friend that will seriously warm your heart.

"Stop messing with my emotions brother @kevinhart4real," Johnson captioned a still from Jumanji 2, just one of the many movies they've filmed together. "We have a lot more laughing to do together," he wrote. "Love you man. Stay strong," the star added, followed by the praying hands emoji.

Now, this isn't the first time that Johnson has posted about Hart on social media, but it very well may be the most sincere thing he's ever shared about his famous friend. He and Hart kind of have a faux feud going on via Instagram, which has resulted in some pretty hilarious content over the years.

Take, for example, the photo Johnson posted back in April of last year, wherein he's cradling an itty-bitty baby — photoshopped with Hart's face — in his big strong arms. "To my beloved son, @kevinhart4real," he joked. "Twinkle Twinkle little Hart / I just don’t know where to start / Daddy will always love and protect your tiny little soul / Even though you were delivered directly out of the butthole."

First of all, wow, amazing. Johnson's photoshop skills might need a little work, but .... just wow. So good. So weird. Second of all, while he was clearly just trying to get a laugh out of Hart with that post — and if Hart didn't laugh, at least everyone else who saw it did — the whole thing about him always loving his "son" was totally true. His recent Instagram shout-out to his injured pal is proof of that, and just goes to show how close they really are.