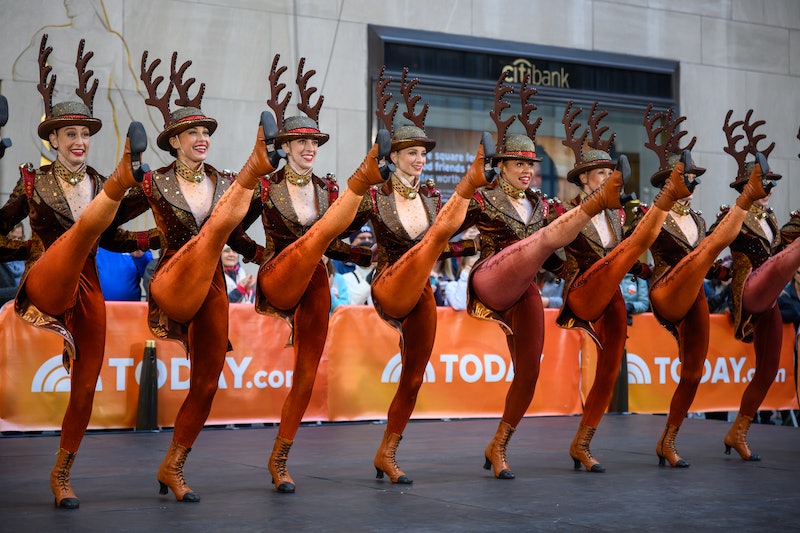 The Radio City Rockettes are taking a step towards diversifying their line-up this season. The world-famous, high-kicking dancing troupe dates back to 1925, and this year they welcomed the first Rockette dancer with a disability, Sydney Mesher, into their ranks. Mesher dancing in the "Christmas Spectacular Starring the Radio City Rockettes" represents a positive change for the organization, which has been criticized in the past for not fully reflecting the diversity of it's home base, New York City, as well as the world at large.

Per ESPN, Mesher has a rare congenital condition called symbrachydactyly, and as a result was born without a left hand. Mesher stresses that her disability never stopped her from reaching her athletic potential, though. She quickly abandoned a prosthetic hand that doctors made because she found it "kinesthetically more challenging," for example, and picked up her own way of playing Little League softball. Mesher was even mentored by Nicole Jamieson, an Oregon-based basketball player who was also born with one hand.

Mesher's mom, Lynn, told ESPN that the most important piece of advice that doctors gave them was to let Mesher figure out how to work with her disability. "Do not handicap her. Do not do things for her. Let her try first and figure everything out," she explained.

Mesher grew up in Portland, Oregon and took everything from hip-hop to jazz, tap, and ballet classes as a kid. She went on to study fine arts at Pace University in New York City, where several former Rockettes teach dance. Starting her junior year, Mesher began auditioning for the Rockettes, and after four tries she finally landed a spot post-graduation. Per ESPN, roughly 1,000 women auditioned for the season, and only 13 of were offered positions, including Mesher.

"Being a Rockette, and being a Rockette with one hand — I am groundbreaking in that sense," Mesher told ESPN. "So even though I don't consider my disability to be that challenging, I need to be in this position to let others have that opportunity."

According to USA Today, Rockettes creative director Karen Keeler said that Mesher is "an incredibly versatile dancer with a strong work ethic" and "an eye for detail.”

Mesher's hiring is indeed a remarkable change for the Rockettes, which is slowly adapting to America's changing demographics. Ginia Bellafante for the New York Times reported that in 2018, 10 of the 80 dancers who make up the Rockettes corps are women of color. Though still low, this is is an improvement over prior years, as the group didn't even accept it's first dancer of color until 1987 with Jennifer Jones. (The New York Times reported in 1983 that the troupe's official stance before that point was that nonwhite legs would "distract" from "the look of precision.") Per the New York Post, alongside Mesher, the Rockettes welcomed four new women of color: Samantha Butts, LaTarika Pierce, Megan Garcia, and Regan Hutsell.

Mesher is certainly aware of how important it is that she's now a member of the Rockettes. “I’m very humbled to be in this position,” Mesher told Newsday. “I am different in my own way ... I want to become the new normal."