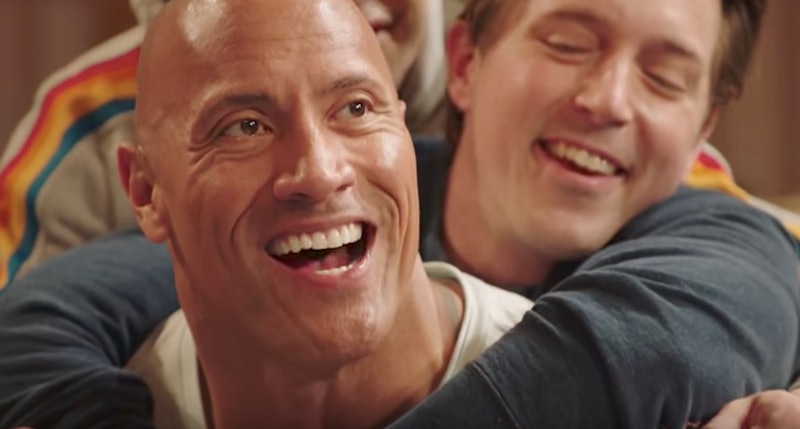 Expectations couldn't be higher for his performance, but The Rock's Saturday Night Live promo proves that nerves are far from an issue. In fact, Dwayne "The Rock" Johnson's confidence seems to be at an all-time high going into his next hosting gig. Saturday will mark Johnson's fifth time hosting the iconic program, adding him to an elite group that, according to Sports Illustrated, boasts just 17 members. But if you thought becoming a member of the five-timers club would trip Johnson up, you've got another think coming. In Johnson's SNL promo, released Wednesday, the wrestler-turned-actor is initially carried across the stage by cast member Beck Bennett, only to flip the script.

When the comedian starts to struggle, Johnson gets down and lets Bennett pile onto his back, along with the rest of the cast. I think it's safe to say that most SNL hosts receive quite a bit of support from the set cast, but Johnson is clearly ready to give all of that back. He beams happily throughout the entire promo, reminding the cast that he has their backs, and even has an adorable moment with Leslie Jones. Perched somewhere up high in the stack of cast members, you can hear Jones ask for a cookie. Grinning up at her and winking, Johnson says, "Oh, I'll go wherever you wanna go." It's the cutest. Check it out in the promo below.

It's the kind of moment that gets me really excited to see how the chemistry with Johnson, Jones, and the whole cast plays out onscreen. He's just coming in with such a palpably great attitude and so much confidence that I know it's bound to be a great show. Just more proof that Johnson was the perfect choice for the Season 42 finale.

The Rock hosts on May 20 with musical guest Katy Perry, and you bet your patootie that I'll be watching this adorableness go down.