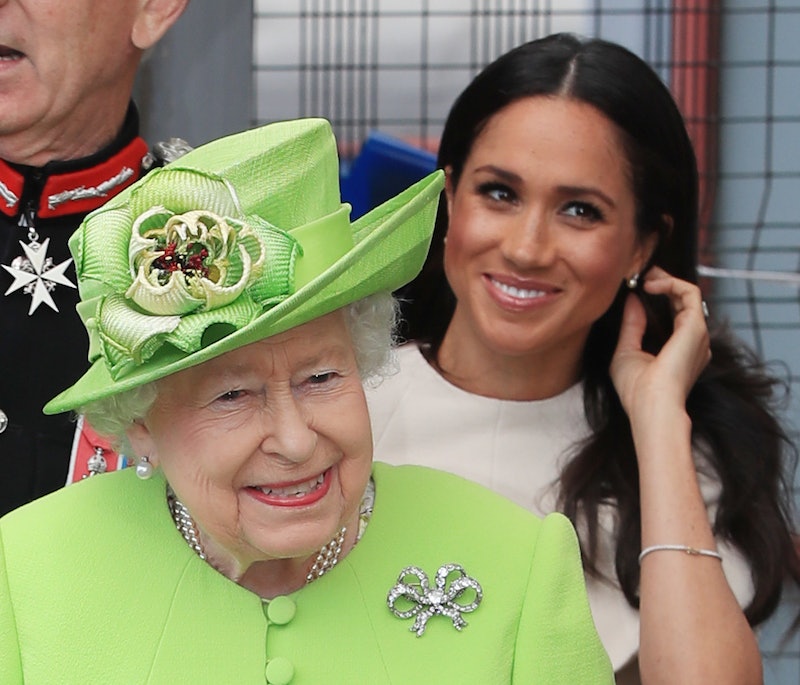 When Prince Harry and Meghan Markle, the Duchess of Sussex share a meal with Queen Elizabeth at Buckingham Palace, there's one dish that's won't be on the menu. Unfortunately, the Royal Family's diet doesn't include pasta or other starchy foods — so Meghan Markle's favorite zucchini bolognese is out. Darren McGrady, former royal-family chef and author of Eating Royally, told RecipePlus that Queen Elizabeth avoids starchy foods like potatoes and pasta, and though she sometimes makes exceptions for special occasions, she has the final say in what's on every menu.

While Markle told Delish that she mainly eats a gluten free diet, when she's traveling she like to sample the local fare. This means that the Queen's no-pasta-in-the-palace rule likely works out just fine for Markle, who can enjoy her favorite dish when she's away from home. "When I'm traveling, I won't miss an opportunity to try great pasta," Markle said. "I come back from vacation every year with a food baby, and I've named her Comida. I get to the set [of Suits] and I'm like, 'Hey, Comida's here, and she's kicking.'"

However, because Queen Elizabeth approves every menu, it's unclear whether or not other dinner guests get a say in what shows up on their plates. McGrady noted that the queen likes things her way and isn't fond of change, which might mean that she's not into getting input on meals.

What's more, just because something you recognize is on the menu at Buckingham Palace, that doesn't mean it will be served the way you're used to. McGrady told RecipePlus that the Queen often tweaks traditional recipes to align with her tastes and the royal eating habits. He called this the royal way of cooking, and added that any chef who wants to succeed at Buckingham Palace must learn it.

"It would be the same if Gordon Ramsay or anybody else went in there," McGrady explained. "It's not that they don't trust you to cook, it's that they want you to learn the royal way of cooking." Basically, if you're a chef who aspires to prepare meals for royalty, you have to check your ego at the door and accept the fact that the queen won't always celebrate your creative recipes. "She eats to live while Prince Philip is the one who lives to eat," McGrady said.

For Markle, who has had to adjust to a number of royal rules since becoming the Duchess of Sussex, not having pasta while dining with the Queen is likely not a big deal compared with, you know, becoming a royal. And, Queen Elizabeth's commitment to healthy eating and serving nutritious meals surely plays a part in her remaining active and engaged at the ripe young age of 92. Royal eating rules reportedly date back centuries.

Royals don't consume undercooked meat or shellfish in order to reduce the risk of food poisoning. They also don't eat a lot of garlic and onions since they spend a lot of time talking to people face to face. Hey, let's be honest, sometimes a breath mint just won't do. Both of these rules actually kinda make sense, and it seems like the secret to the longevity of the royal family is deeply rooted in common sense. If you're not a royal, go ahead and get that seafood pasta with extra onions and garlic, and rest easy knowing that being a royal is really hard, y'all.