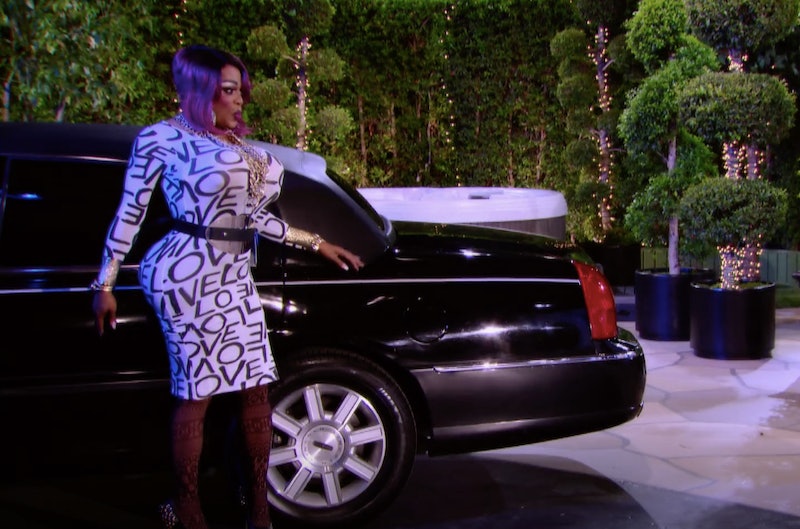 RuPaul’s Drag Race All Stars is now through its third episode, and boy was it an entertaining one. After the Feb. 1 episode spoofed some of the most well known singers and divas of pop culture, on Feb. 8 RuPaul's Drag Race All Stars parodied The Bachelor. The renowned ABC series about finding love provided the perfect opportunity for a Drag Race competition.

RuPaul, playing the best version of Chris Harrison, set up the week by describing to the queens that this week’s primary challenge would be about improv sketch comedy. The form that took was a Drag Race style parody of The Bachelor titled: “The B*tchelor” with the “i” stylized as an eggplant emoji. (Of course.) While the queens would all play exaggerated stereotypes of the women that appear on the series, the role of the B*tchlor himself was played by UnReal star Jeffrey Bowyer-Chapman. Every detail of the spoof was made to remind audiences of the The Bachelor, although depicted in the outlandish Drag Race style fans love, from the the limousine intros to the double dates.

There were plenty of cliches that crossed over. For example, Drag Race poked fun at the women who seemingly go on the show only to further their own careers, like the “fake b*tch (played by Trixie Mattel). There were also jokes referencing age through BenDeLaCreme’s character, “the cougar,” and sexuality with BeBe’s character “the virgin,” among others.

The shade wasn't just thrown by the queens at the typical show contestants. RuPaul's version also threw shade at how the leading men and women on the real show are largely white. The real Bachelorette only just recently had its first black lead after 33 seasons of both The Bachelor and The Bachelorette, and it has still yet to have a black Bachelor.

The other way Drag Race strove to be more progressive was through the inclusion of a polyamorous couple — played by Chi Chi Devayne and Shangela. While their depiction could be seen as problematic in certain aspects, it was interesting to see a different type of relationships being showcased on a dating show. The real Bachelor still has a long way to go with that. As a writer with Refinery29 notes, the one time a bisexual contestant was included on Bachelor in Paradise, there were rather cringeworthy results — with many of the cast making insensitive comments.

Drag Race All Stars is far from the first TV show to take a stab at parodying The Bachelor or The Bachelorette. Back in 2012, there was the web series Burning Love that had fans LOL-ing. More recently, the role of poking fun at The Bachelor has fallen to Saturday Night Live. For years now it has openly mocked the series in annual skits. In 2015, it was Chris Soules' season. In 2016, it took aim at Ben Higgins' season. Then in 2017, the show mocked Nick Viall’s season.

Just a few weeks ago, SNL parodied Arie Luyendyk Jr.'s season of the iconic series. The spoof, titled “Car Hunk,” felt similar to past parodies, much in the same way Bachelor feels similar to previous seasons. However, there were some truly funny moments — like when the actor portraying Arie was simply replaced with another guy… and no one seemed to notice, outside of the show’s audience anyway.

While it doesn’t seem likely that Ru and Drag Race will be making this an annual challenge, like SNL does with its parodies, this was certainly an episode worth watching. Between BenDeLaCreme’s “cougar” and Kennedy Davenport’s “party girl,” the queens took no prisoners when it came to mocking The Bachelor or its contestants. In a series filled with so much flash it’ll be interesting to see where the shade falls next.