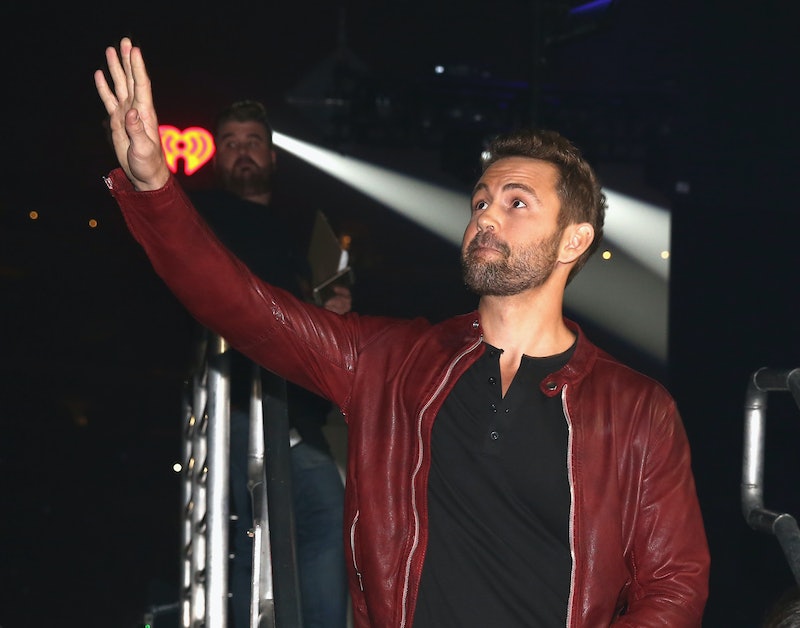 Nick Viall's season of The Bachelor is just getting started with awkward group dates and wild revelations. And naturally, Saturday Night Live was set to parody the brand new season, as the show usually does. SNL parodied Nick Viall's Bachelor season in the "Beard Hunk" sketch and that title is quite a compliment to Nick. I mean, he does have a beard and he has the most impressive abs, so thus "Beard Hunk" totally fits. This could be a new nickname for him, but hey, let's remember he's so much more than just a hunk with a beard — Nick has also proven to be a man who has a never-say-die attitude and a lot of wisdom.

So SNL's Beck Bennett has a lot to live up to when he steps into Nick's shoes in the sketch, where Bennett's Nick has a meet-and-greet session with many of the contestants by a bench. Reminiscent of previous Bachelor parodies, many of the contestants stop by the bench to ask, "Can I steal you away for a sec?" and have short, but hilarious conversations. Kate McKinnon's contestant even reminds Bennett's Nick that they were once married, which definitely references Liz's pre-season hookup with Nick at Jade and Tanner's wedding. Host Felicity Jones steals him away to tell him her story as "Ashley who was born in an alley" eight months early and who only brought a one-piece bathing suit to Bachelor Mansion.

Aidy Bryant steals him away as a contestant who is a single mom and adores frogs for many reasons, which could possibly be a reference to all the dolphin love on The Bachelor this season, including Alexis' dolphin/shark costume. It's always hilarious to see SNL's take on the current Bachelor season and "Beard Hunk" was no exception.

Watch the sketch in the video below.