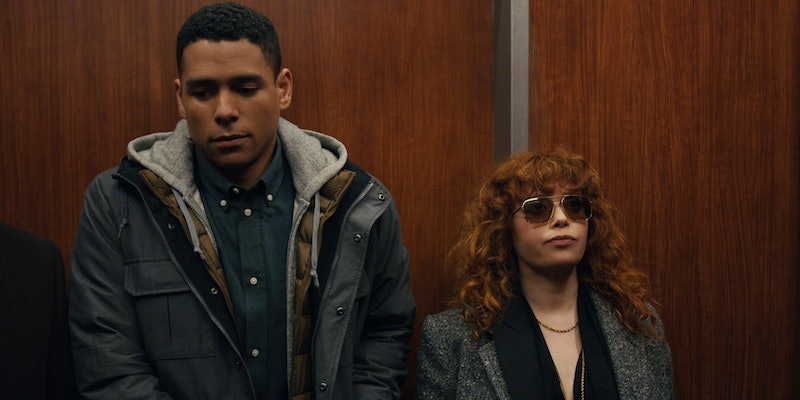 One of the most iconic elements of Groundhog Day is that each time Bill Murray's character, Phil, awakens to relive the same day, it begins with a radio playing Sonny and Cher's "I Got You Babe." The songs in Russian Doll, Netflix's new Groundhog-inspired comedy, are used in the same way — except its lost and confused protagonists aren't just stuck on a confounding (but inconsequential) loop, they're reliving the day they die. And while there's no official Russian Doll soundtrack just yet, there are a few observations to be made about the way the show's music propels its story.

Among the tracks featured in the series are "Don't Put Off Til Tomorrow" by Pony Sherrell, "Migas 2000" by The Limiñanas, "Caldera, Caldera" by Gemma Ray, "Black Water" by Timber Timbre, "You Know What I Mean" by Cults, and "Alone Again Or" by Love. There's a distinct retro feel to these choices, though the soundtrack doesn't stick to one particular genre or decade. The show also features original music composed by Joe Wong, who contributed to other Netflix favorites like Master of None and To All The Boys I Loved Before.

However, just as in Groundhog Day, there are two songs that play a larger role in the show. The song that starts off Nadia's loop is Harry Nilsson's "Gotta Get Up." The lyrics are repetitive, all about routine, and starting each new day over (and over and over and over...you get the picture). "Gotta get up, gotta get out, gotta get home before the morning comes" — it's not difficult to eke out the significance here. Nadia's primary goal, when her time loop conundrum begins, is just getting home before morning without dying.

The song that starts Alan's loop on the other hand, is Beethoven's "Piano Concerto No. 4 in G Major, Op. 58: Rondo — Vivace". The exact track in the show, according to Shazam, is a version performed by the Royal Philharmonic Orchestra and conducted by Howard Shelley.

It's a long title, even for a classical piece, but significant and fitting to the story as well. The musical form "rondo," according to the Encyclopedia Brittanica, can be "characterized by the initial statement and subsequent restatement of a particular melody or section, the various statements of which are separated by contrasting material." It repeats. It goes back to the beginning. Just like what's happening to Alan and Nadia in Russian Doll.

Additionally, "Vivace" means to be played "lively and brisk," which if you wanna get really deep could be seen as an encouragement for Alan to live, just like Nadia's song encourages her to get up and get out and get home — or it's meant to be dark and ironic, since he keeps dying.

The trailer also featured "Crimson and Clover" by Tommy James & The Shondells, which repeats the lyric "over and over." Clearly, repetition plays a big role in the show — both in the narrative and in the music — and these choices seem very intentional, both for Nadia and Alan and for us viewers.