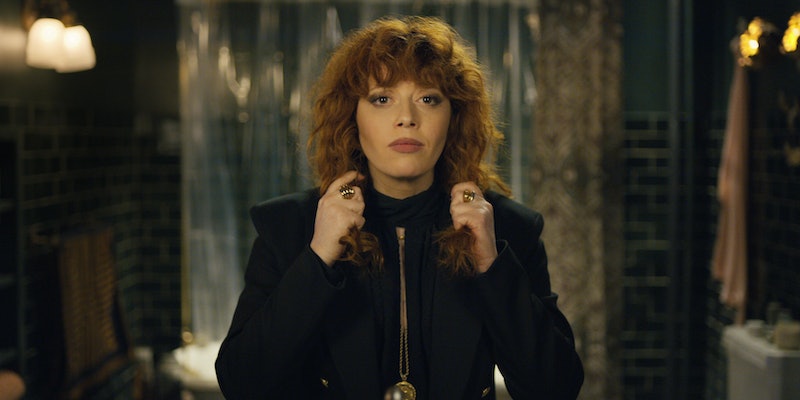 You may think you've heard Russian Doll's story before. Taking a page from movies like Groundhog Day, Happy Death Day, and Edge of Tomorrow, it follows Natasha Lyonne's character, Nadia, who keeps reliving the day she dies on loop. But while it may have a familiar premise, it's far from conventional, pushing back against the "unlikable female character" trope by showing women don't have to be unpleasant to be complex; the two aren't mutually exclusive.

There's a popular phrase in screenwriting called "Save The Cat," coined by Blake Snyder. It refers to the practice of giving your protagonist at least one redeemable quality so that the audience is willing to follow their story. In Aladdin, the titular hero is a thief, but he gives his bread to starving children. In the Suits pilot, Mike deals drugs and helps people cheat on the LSAT for cash, but uses that cash to take care of his sick grandmother.

In Russian Doll, Nadia does save a literal cat (Oatmeal, the GOAT and the real MVP of this series), but that isn't the only thing that makes you like her, is it? She's funny, she has a good relationship with her friends, and she's incredible at her job. Plus, her romantic history is probably the least interesting thing about her, and entirely unrelated to the challenges she confronts throughout the show.

She also doesn't have to rely on a man to solve the crisis at hand. Not only does she already know about game theory, relativity, and the multiverse because of her job as a video game designer, but she's the one explaining it to Alan, a defeated pushover stuck on his own loop that she encounters along the way. Nadia's talents are suited to her existential predicament, causing us to at least once or twice wonder if the game she's in is one of her own invention. It also allows her the space to look within and focus on herself to figure out what's happening.

"It feels as though a woman has to be actively fixing something or searching for the guy but rarely is she searching for her own soul," Lyonne told Broadly of the character in January. "That's usually of the luxury of straight, white men on film. It's very Jack Nicholson in Five Easy Pieces. In my experience, we don't get to explore that as women, but universally, we're all stuck with ourselves."

Over the last few years, female creators have rightfully pushed back against the idea that women need to be likable. Shows like Killing Eve, Girls, Fleabag, and GLOW all star women who are layered, damaged, grating, and, frankly, sometimes difficult to root for. That's helped to expand the way women are seen — at least on-screen — and now, Russian Doll is taking it even further, showcasing a woman who is, yes, a bit of a mess, but also responsible, accomplished, and very, very personable — not because society has forced her to be, but because that's simply who she is.