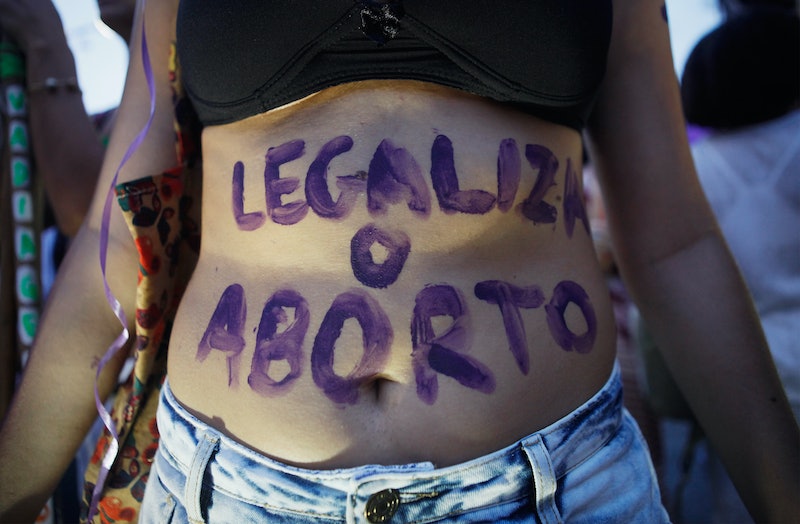 A 20-year-old Salvadoran woman could have spent decades of her life in prison. Imelda Cortez was charged with attempting to terminate her pregnancy — which is illegal in the country — but said she didn't realize she was pregnant. As the world closely watched her case, the Salvadoran woman jailed in an abortion case was acquitted on Monday.

El Salvador's abortion laws are among the strictest in the world. Terminating a pregnancy is illegal under any circumstances, including rape and when health risks exist for the mother. Doctors who are found to have helped a woman get an abortion can also face criminal charges, which often incentivizes them to notify authorities when it seems like a woman may have tried to end a pregnancy. This has led to the conviction of women such as Carmen Vásquez, who served 11 years in jail after a stillbirth.

The same thing happened to Cortez, who says she was raped by her stepfather. Cortez birthed a daughter in a latrine and then went to the emergency room for bleeding and pain, per the Guardian. She said she hadn't known she was pregnant before giving birth. The hospital doctor called law enforcement and alleged that her symptoms pointed to a failed abortion. Prosecutors later made the case that Cortez had tried to murder her baby by not informing anyone of her pregnancy or getting medical attention, per the BBC.

But she's now been declared innocent of any charges. The court ruled that Cortez couldn't be expected to have behaved differently under the circumstances of sexual and emotional abuse she suffered for years. Cortez alleges that her stepfather, who is now 70, abused her from the time she was 12 years old. A DNA test later showed that the child she birthed was, in fact, her stepfather's, as the Guardian reports. According to the BBC, her stepfather has been arrested and will be tried in court himself.

Cortez waited in custody for 18 months before being acquitted. "It took the whole world to make the judges and prosecutors see what we’ve been saying for years: an obstetric emergency is not a crime," Paula Avila-Guillen, a member of Cortez's team of attorneys, told the Guardian.

"This ruling ... gives us hope because it shows that judges are finally daring to make decisions from a gender perspective rather than based on gender stereotypes," Bertha María Deleón, another of Cortez's lawyers, told the Guardian. "This judge shows us that the criminal justice is changing — slowly, but it is changing."

According to the Guardian, reproductive rights organizations have been campaigning to free El Salvadorian women who they believe were wrongly incarcerated under the abortion ban. Cortez and Vásquez are two of six women to be freed this year, partially as a result of these efforts. But many women who have allegedly been falsely imprisoned are still behind bars.

"This sentence ... represents hope for women who are still in prison and are also being tried for aggravated homicide," attorney Ana Martinez told journalists on Monday.