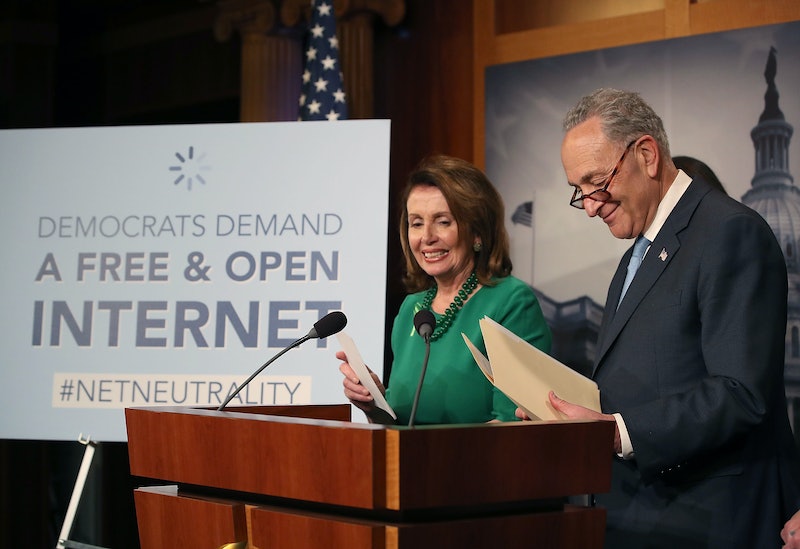 On Wednesday, House and Senate Democrats introduced the Save the Internet Act, which gives Congress an opportunity to re-establish net neutrality. According to NBC, this is the Democratic Party's most recent effort to combat the Trump administration's reversal of an Obama-era rule that worked to prevent companies from skewing user access to certain websites and services. Republicans have also put their own net neutrality legislation forward — but Democrats aren't too interested offer, according to NBC.

Net neutrality rules were initially passed by the Obama administration in 2015 in an attempt to ensure that all people would have equal and fair access to any and all content on the internet. For example, this would ensure that internet providers couldn't intentionally slow down or speed up your internet speed on certain sites, or charge you more for using some sites over others.

During the announcement on Wednesday, NBC reports that House Speaker Nancy Pelosi said, "This legislation brings the power of the internet to every corner of this country, from rural America and to our cities. A free and open internet is a pillar in creating opportunities."

Senate Minority Leader Chuck Schumer also chipped in at the announcement. Per NBC, he said, "This is a second chance to right the Trump administration's wrong."

Similarly, Sen. Ed Markey, who is a sponsor of the bill, said on Wednesday via NBC, "Another way of saying net neutrality is saying nondiscrimination against the smallest companies, against the smallest voices within our society. We are standing and fighting for them here today, and we will not stop till we win."

The new legislation's text aims to reverse the 2017 Federal Communications Commission decision to repeal net neutrality rules, and to restore the 2015 regulations put in place by the Obama administration.

Per The Washington Post, the FCC responded to the new legislation with a statement arguing in part that the commission has “proven wrong the many hysterical predictions of doom from 2017, most notably the fantasy that market-based regulation would bring about ‘the end of the Internet as we know it.’”

The question, of course, is whether it's possible on any level for this legislation to pass the Republican-controlled Senate and then become law. The simple answer is that it's definitely possible for some sort of net neutrality legislation to make it through, even if it's not this one. The fact that Republicans have introduced their own net neutrality bills in recent weeks shows that this is, at least to some extent, a bipartisan issue.

However, Democrats have been unimpressed with the Republican legislation around net neutrality so far, according to NBC. But some would argue that's not necessarily a bad thing. Former FCC Chairman Tom Wheeler said that the bipartisan disagreement over net neutrality will at least give the topic a national stage. To NBC, he explained, "There will now be a debate on the definition of what is meaningful net neutrality."

If Democrats' new legislation is passed, customers will be fully protected from providers who wish to discriminate or manipulate access to various parts of the internet. Per Slate, this isn't the first time that Democrats and Republicans have offered up solutions to the net neutrality debate — and it likely won't be the last time, if this legislation doesn't bridge the gap across the aisle. The legislation will first be voted on in the House, though the date for that vote has not been set.