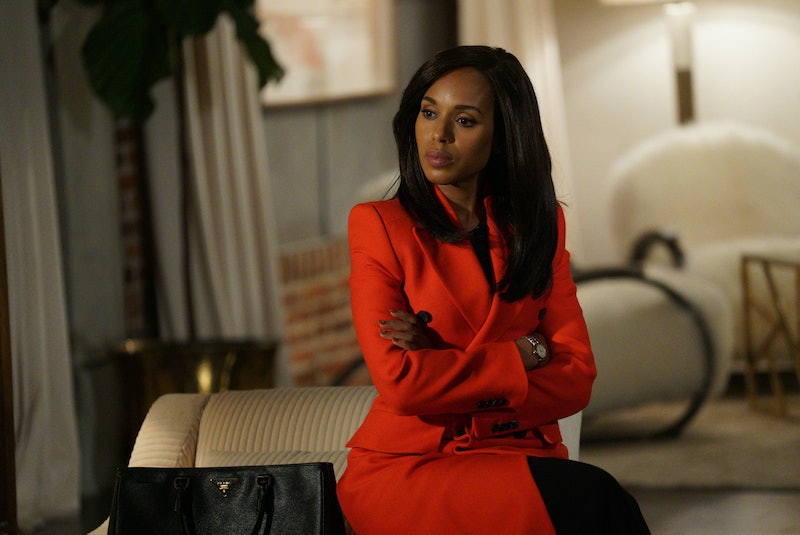 Get to the edge of your seat and start holding your breath, because in just a couple months, Scandal and How To Get Away With Murder will have the crossover you've been waiting for. The larger-than-life characters anchoring each series will finally cross paths, and the best part about it is that it won't happen just once, but twice. Maybe you hadn't even thought to ask which of the two shows these women will be converging on, but the answer is better than you could've possibly hoped for: both. On Mar. 1, Viola Davis' Annalise Keating will appear on Scandal at 9:00pm EST, and then Kerry Washington's Olivia Pope will jaunt over to How to Get Away with Murder at 10:00pm.

The set-up is quite literally the best of both worlds: both characters will appear on the other's show, one after the other. Each will spend one episode on their home turf and one on unfamiliar footing, leveling out the playing field in a way that the law professor and the fixer would likely both appreciate. It's truly the perfect arrangement, not only because it means double the crossover, but also because of the way it lets each character shine. Fans won't have to settle for watching one character's storyline get shoehorned into the other, and these two powerhouses will get to coexist without diminishing each other.

The crossover has been speculated about for months and was finally confirmed in an interview with Deadline, and now we finally have a date. According to HTGAWM creator Peter Nowalk, the idea happened organically, and when he brought it to Scandal's Shonda Rhimes, she agreed that it was the perfect opportunity for the plot lines of the two shows to intersect. Nowalk said earlier this month that the two-hour block will all contain the same character arc, the two women will have scenes together, and that it will take place in one consistent location. (Even though the shows are set in two different cities — Philadelphia and Washington, DC.)

Each episode will reportedly stand alone, so they make sense in the arc of their own season if you only see one, but there will be other character crossover in addition to the two leads. And while there's been no official word on the plot yet, Entertainment Weekly speculates that Annalise's class action against the State of Pennsylvania is a potential hinging point. Possibly there will be a way for President Mellie Grant's chief of staff to offer her services in the wrongful convictions lawsuit.

Regardless, the crossover will be a rare — if not unheard of — treat to see two strong, complicated, three-dimensional women of color share the spotlight like this. They're of equal status, but their personalities and histories are completely different, and it really drives home the incredible work that Shonda Rhimes is out there doing. While much of the rest of the industry struggles with how to tell diverse stories and how to write women who aren't one-dimensional foils for their male counterparts, Shondaland is filled with those stories and those characters. They can stand alone, they can run for multiple seasons, and they can cross paths on each others' shows without running the risk of steamrolling or reducing each other.

That's a powerful thing, and it's reflected in the attitude of the actors playing these roles, as well. "I really love Viola. I have such immense respect and admiration for her," said Kerry Washington of her crossover co-star. And Davis only had wonderful things to say about the filming process. "It was black girl magic on steroids!" she told EW. "Me and Kerry dancing to ‘Rock the Boat’? Hey, it can’t get any better."

Shonda Rhimes is the best in the game right now, creating characters that can orbit each other without lessening each others' influence. It's just further proof that we need more powerful, well-written female characters and characters of color. Far from drowning each other out, a multitude of Olivia Popes and Annalise Keatings only serve to amplify each others' voices.