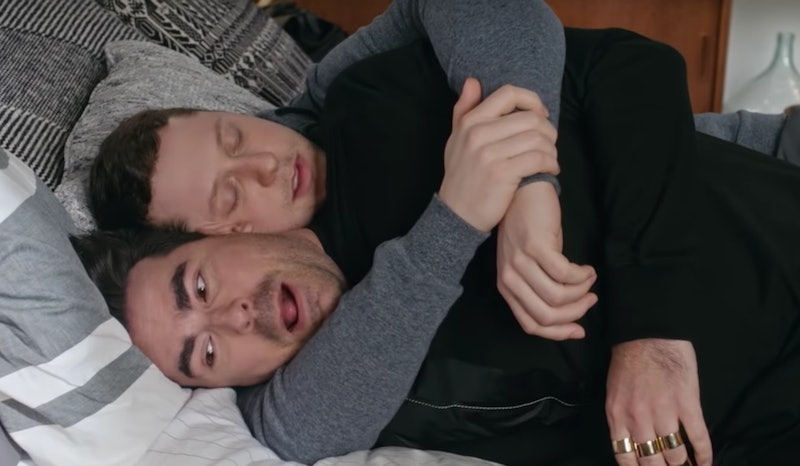 It’s time to say goodbye to the zany locals of Schitt’s Creek. The new Schitt’s Creek trailer for the final season teases some wedding planning roadblocks and emotional departures — and we're not OK. Ahead of the sitcom’s return next month, Pop TV unveiled a new trailer on Friday, Dec. 20, that offered a glimpse of the beloved town folks’ storylines in the sixth and final season: David and Patrick encounter wedding planning troubles, Alexis exchanges an emotional goodbye with her brother, and Stevie prepares to embark on a new adventure of her own.

The bittersweet clip opens with a commercial for the newly-renovated motel. Moira, accompanied by awkward and stiff co-owners Johnny and Stevie, says in the video, “When it’s time to lay down your weary head, you’ll find comfort and safety at the partially-renovated Rosebud Motel." In the more tear-jerking moments, Patrick shares a moment with his soon-to-be father-in-law, Alexis bids farewell to David as she prepares to leave town, and Stevie seemingly decides to branch out of her hometown and says, “Maybe there’s something more out there for me.”

The trailer concludes with a voiceover from Johnny: “There is value in these motels,” he says. “My family and I have been staying in a motel for the past three years. I wouldn’t trade our stay there for anything.”

Created by stars Dan and Eugene Levy, Schitt’s Creek follows the wealthy Rose family comprised of patriarch Johnny (Eugene Levy), matriarch Moira (Catherine O’Hara), son David (Dan Levy), and daughter Alexis (Annie Murphy) as they move to the small town of Schitt’s Creek — their one remaining asset that they once bought “as a joke” — when they suddenly find themselves broke. Originally released in 2015, the sitcom received a cult following upon its arrival on Netflix earlier this year.

Amid the series' success, co-creator Dan announced the show would end after Season 6 back in March. In an interview with E! News at the time, he explained of the decision, "The thought of pushing [the show] past its expiry date for the sake of just being able to do another season — I care too much about our viewers and about our characters to risk taking them farther than they need to be taken."

While fans are sad to say goodbye, Dan promised a satisfying conclusion to the series. At an Emmys “For Your Consideration” event in May, he said of the “simple” yet “impactful” finale, as per Variety, “At the end of the day, all people want out of a series finale is just a really f*cking great episode of your show.” Emily Hampshire, who plays the beloved Stevie, echoed these sentiments. "You will not only be satisfied, but pleasantly surprised and hopeful,” she told Bustle earlier this month. “I mean even if a fire burns down the whole motel and everyone in the town dies, you're still hopeful."