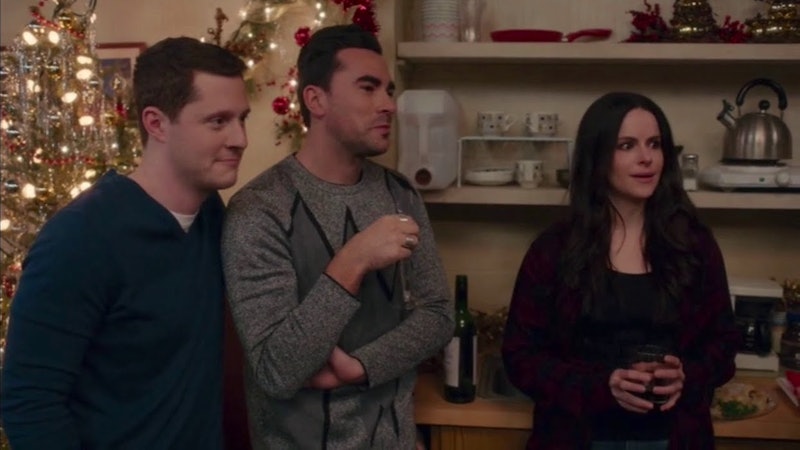 Schitt’s Creek left off with both highs and lows for its quirky residents: David got engaged, Moira retreated into a wardrobe after her Crows film was shelved, and Stevie dazzled as Sally Bowles in the town's production of Cabaret. All of it felt like the show was setting the table for a hopeful ending to the sixth and final season of the cult favorite sitcom. But what can we expect is in store for the Roses and everyone in their orbit when the series returns on Jan. 7? Bustle recently caught up with Schitt's Creek star Emily Hampshire, who plays Stevie, at the show's immersive pop-up event in Los Angeles, and she provided some insight into how David and Patrick's impending nuptials will affect the new season.

While their engagement is undeniably happy news for their family and friends, it doesn't mean that Stevie doesn't feel a tinge of disappointment. "Just imagine your best friend, as happy as you are for him that he's found somebody as great as Patrick — [his engagement] doesn't include you," she says. "I think there is a sense of Stevie feeling left behind. But what I love so much about Stevie is she can feel that [way] but she'll [still] always do good for David. She's always his best friend.”

In March, creator and star Dan Levy announced that the beloved series would end with Season 6. The news saddened fans of the series, which had burst into the pop culture zeitgeist earlier this year upon its arrival on Netflix. Hampshire believes the conclusion is bittersweet. "As sad as we are for it to end, now that we've done it, I totally respect Dan's decision," she says. "He absolutely has respected the fans by giving them this ending that he always had planned."

Hampshire may be bidding adieu to Stevie after six seasons, but her role as co-owner of the Rosebud Motel will remain with her long after. Literally. She snagged a prominent prop from set upon the series' wrap: the giant stag painting from the motel. "It looks big in [the motel], so imagine that in a 600-square-foot, tiny condo," she says.

As for the fans who must bid farewell to the beloved series and its characters, Hampshire insists that viewers will be satisfied with its ending — and even invoked a subtle nod to the fiery Game of Thrones finale. "You will be so satisfied. You will not only be satisfied, but pleasantly surprised and hopeful," Hampshire says. "I mean even if a fire burns down the whole motel and everyone in the town dies, you're still hopeful."

More like this
Theo James Revealed The Truth About His 'White Lotus' Nude Scene & Fans Can't Cope
By Stephanie Topacio Long
The 'Kenan & Kel' Reunion On 'SNL' Took A Dramatic Turn, Thanks To Keke Palmer
By Brad Witter
Keke Palmer Just Announced She's "Going To Be A Mom" On 'SNL'
By Brad Witter
This 'Derry Girls' Reunion Has Delighted Sister Michael Fans
By El Hunt
Get Even More From Bustle — Sign Up For The Newsletter