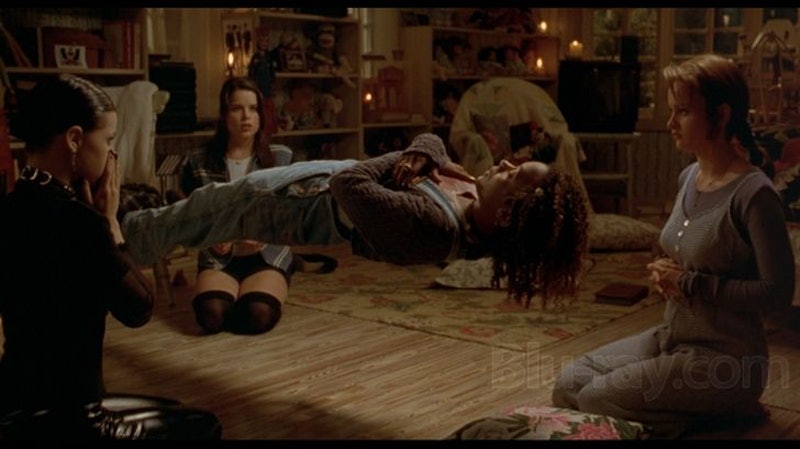 If you grew up in the '90s, then you've almost definitely heard of the game "Light As A Feather, Stiff As A Board." It was one of those slightly spooky, kind of anxiety-inducing games that was played at most slumber parties, especially in the weeks leading up to Halloween. When done correctly, it results in a bunch of teens making one of their friends levitate — which doesn't seem like it would work, but strangely enough, it sometimes does. It's still played by kids, of course, and it still gives people nightmares. As creepy as it may seem, though, there's a weird but scientific explanation for "Light As A Feather, Stiff As A Board" that just might make it less scary.

As a quick refresher for anyone who can't remember the specifics, the game is pretty simple. To play, one friend lies motionless on their back with their arms crossed over their chest, on the ground, almost as if they were laying in a coffin. Everyone else kneels around this person, sliding their index and middle fingers from each hand under the body. The leader of the group tells a story about the person in the middle "died" and starts a chant that is supposed to bring their spirit back to their body. The chant goes, "Light as a feather, stiff as a board." Everyone says it over and over again, and as they begin to raise their hands under the person laying down, that person begins to float in the air. It's just as creepy as it sounds.

Even creepier? It's been around for a really long time. According to Cosmopolitan, the first record of this game being played was back in the 1600s. A mention of the game (although not by the same name) was found in the diary of British naval administrator and Member of Parliament Samuel Pepys. His friend witnessed four little girls playing the game in Bourdeaux, and Pepys wrote about it, describing the exact game we still play today.

While there are several theories about how and why it works, what it really comes down to is science... and, according to ABC Science, "timing, poor memory, and the natural underestimated strength of your fingers." What's happening is that a whole bunch of people are lifting a person in the air with their fingertips. Because you're only using two fingers, it might seem kind of impossible to lift a whole person. You don't really take into account that several people are using two fingertips — and that our fingers are stronger than we think. All of those people lifting at the same time (thanks to the chanting countdown) makes it very simple to lift an entire body.

Basically, it's not strange that this happens — we just get so caught up in the moment that we don't think it through, and so it seems strange. It's a spooky atmosphere: your friend is pretending to be dead, you're all pretending they really did die, there's chanting that reminds you of a scary movie, and it's probably dark. It's the perfect recipe for a situation where you can ignore physics and start to think witchcraft is really at work.

More like this
Heinz Just Relaunched A Bean-Tastic '90s Fave
By Sam Ramsden
People Are Flocking To The Hive Social App Following Twitter’s Changes
By Kaitlyn Wylde and Alexis Morillo
5-Year High School Reunions Vs. 10-Year High School Reunions
By Ginny Hogan
How To Switch Back To A Personal Instagram Account From A Professional One
By Alexis Morillo
Get Even More From Bustle — Sign Up For The Newsletter