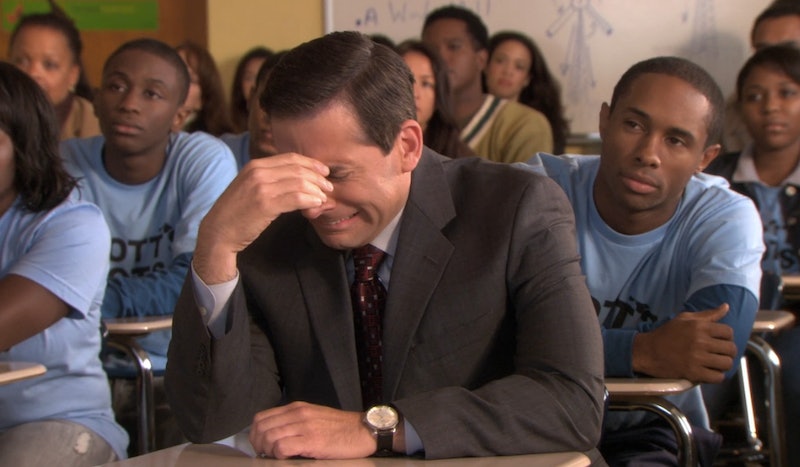 Hey, Mr. Scott, whatcha gonna do? Whatcha gonna do? Make our dreams come true! If reading those lyrics brought on a sudden case of mild nausea, then you are probably one of the many fans of The Office who can't watch "Scott's Tots", the episode in which Michael Scott has to confess to a group of high school students that he can't uphold his decade-long promise that he'll pay their college tuition. There's no doubt that the episode is uncomfortable, but the effect it has on viewers is on another level compared to the countless other awkward moments shown on The Office. But why? What's going on psychologically when we see Michael Scott enter that classroom of cheering, custom T-shirt-wearing kids that makes fans not only cringe, but often, have to turn off the episode completely?

According to Dr. Judith Orloff, author of The Empath's Survival Guide, it's us. We're the problem. "If the cringe response is intense," she says, "fans might very well avoid this episode to avoid something painful of hard to face in themselves."

Before we have existential crises, though, some background on this whole "Ahhh, no! Not 'Scott's Tots'!" thing. Office fans tend to watch the series over and over again without getting sick of it, but this episode is still widely skipped because of just how uncomfortable it makes viewers feel. There is even a Subreddit called CannotWatchScottsTots. It has 12.3K subscribers, and while it was started years ago, it has regular updates, including astute explanations of "Scott's Tots" like this one: "The moment Toby put his hand on Pam's knee but stretched out for a whole episode."

There's the obvious thing that makes the storyline so cringe-worthy: a man promises students that he will pay their college tuition, is not able to, and has to confess that to them. But we also find out in the episode that Michael has stayed in touch with the kids over the years, that the school has named a reading room after him, and that the students even planned a special performance in his honor.

And since we've also spent six seasons with Michael at this point, we know that he used to be incredibly awkward and tactless, but has matured in many ways — minus this moment. In fact, some fans say that Michael's character arc — being straight-up offensive and unlikeable in the first season to later becoming endearing and worthy of his own love story — is what makes this episode so hard for them.

"Season 1 Michael Scott is unbearable to watch, and by the time we're at Season 4, he's a sympathetic character," says David. "'Scott's Tots' in Season 6 feels too much like a callback to early Michael." Another Office fan, Rebecca, who says she "hates" the episode, has a similar issue with it. "Move the plot of 'Scott's Tots' to an earlier season, and I think the writers could have handled it far more successfully than they did," she explains. "'Scott's Tots' just straight up isn't funny enough to make up for its cringeyness." Another fan adds, "Episodes like 'Scott's Tots' and 'Gay Witch Hunt' [in which Michael outs accountant Oscar as gay] are harder to stomach because the cringe actually outweighs the humor."

As Office fans, we feel like we know Michael, so the fact that he's the person who has to make such a confession only makes the viewing experience worse — both mentally and physically. "When we are emotionally triggered by an area that feels painful or unacceptable to us, we may cringe," explains Orloff. "The cringe is associated with the stress hormone response being activated so there is increased cortisol, increased muscular tension, and sometimes increased hydrochloric acid in the stomach — all unpleasant sensations."

Do you feel nauseas and tense as soon as you hear Stanley laugh and whip out that newspaper clipping? Now you know what's going on with your body.

This episode has taken a toll on countless viewers. "The cringe factor of Michael promising college tuition to a group of kids and then having to face them with his broken promise years later is too much for me," says a fan named Belinda. According to another fan, Angela, "When the students start chanting 'Mister Scott! Mister Scott!' I about lose it. Then when the kids start a choreographed dance for Michael I squirm in my seat."

Psychologically, everything we see happen in "Scott's Tots" causes us to experience two key feelings: empathy and shame. "Cringe-worthy moments are the emotion of shame," says Dr. Pamela Rutledge of the Media Psychology Research Center. "Shame is more fundamental than guilt. Shame is the feeling that the whole self is flawed — inadequacy, unworthiness, or disconnection. It is a core emotion that has to do with our connection to others ... Shame is physically uncomfortable because it is not something we want others to see. The anticipation of being shamed creates anxiety."

Well, pretty much all of "Scott's Tots" is the anticipation of watching someone be shamed. In the 21-minute episode, Michael makes his confession 13 minutes in. Before that is all build-up to what we know he can't get out of doing: giving those kids laptop batteries ("They're lithium") instead of over a million dollars worth of college tuition.

"I stopped watching this episode because of the anxiety I felt leading up to his confession," says Isabel, who has watched the rest of the series 20-plus times. "Although I believe that he made this promise with good intentions, I think he is way too delusional to understand the gravity of his betrayal to these kids."

When the episode came out in December 2009, reviewers knew it was a very uncomfortable one, but it wasn't heralded (or lambasted) as "the most unwatchable episode ever", which is a prize it takes by a long shot for many fans today. Vulture called it an "ingenious plot, because it’s painfully uncomfortable", and The A.V. Club said it was a "kick-ass episode". Meanwhile, Entertainment Weekly put forth that "tonight’s episode robbed us of whatever last shred of compelling humanity Michael may have had left."

Michael did a "terrible, terrible thing... just terrible," as Pam Beesley puts it in "Scott's Tots", but — at least watching it again today after seeing the entire series — because we know Michael, we still want him out of this situation and feel empathy toward him.

"Shows that we see a lot, like The Office, where over time we have begun to identify with and/or have connections to certain characters, causes us to internalize or empathize with the character’s behavior and emotions," Rutledge explains. And in this installment in particular, we empathize with both Michael and with the students. "Many of the cringe-worthy episodes in The Office have to do with us empathizing with both the character, as well as the victim of the shameful episode and the publicness of the exposure."

Adds one Office fan, Molly, "It's bad because we are disappointed from the kids' side... but also from Michael's side because he thought he was going to be rich and he isn't and he's still a regional manager at a failing paper company." Says another fan, "It's super difficult for me to watch because it's one of the times Michael's shenanigans actually hurt people irreparably."

"Not delivering on the scholarships combines the sense of personal failure with a violation of a universal norm."

The fact that the victims are kids only adds to that feeling. "It was just too real for me," says Olajide. "At the time I was a freshman in college on scholarship, and I could not handle watching kids being told that their financial support for college didn't exist."

According to Rutledge, most human beings "have a fundamental sense of a 'just world', which says that bad things should not happen to innocents. Not delivering on the scholarships combines the sense of personal failure with a violation of a universal norm."

As such, many fans skip "Scott's Tots." And anyone who has done so probably already knows that they're doing it to protect themselves in order to steer clear of that cringing feeling. What they might not think so much about, though, is what else they're avoiding facing: something shameful they've done themselves, as Orloff mentioned earlier.

"Watching an episode like this might easily trigger memories of an audience member’s shameful experiences, increasing the personal discomfort," Rutledge explains. "Shame motivates us to save face and there is an inclination to hide or avoid when shame is likely to be triggered." So when "Scott's Tots" comes on, some fans press the "Next Episode" button on Netflix as quickly as possible.

Or, as is the case for some fans, they skip the episode completely, or don't watch it all the way through. "It started when I was watching The Office as it aired, and I read a brief synopsis of the episode on The A.V. Club," explains Jamie. "Finding even just the synopsis impossibly cringe-y, I delayed watching the episode. As the years passed and I continued to watch The Office, I never found a time that seemed right to watch 'Scott's Tots'."

Other viewers might wish they could go back to that point, too — if only to not have that song haunt them forever. "The song is stuck in my head for days afterwards," says Emily. "Talking about it just makes me shudder."