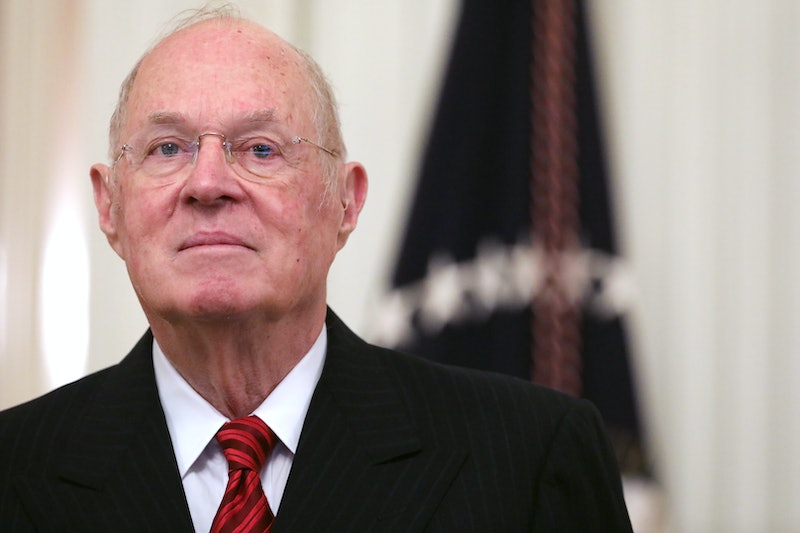 While bidding farewell to one of their esteemed former colleagues on Monday, the Supreme Court justices penned a letter to Anthony Kennedy as part of the branch's running tradition. Replete with praise for the retired Kennedy, who is endearingly addressed on "Tony" in the letter, Supreme Court Chief Justice John Roberts thanked him for his "kindness, camaraderie, and generosity." The letter was signed by all nine current justices, according to The Washington Post.

Roberts added that the justices would be "keenly aware" of Kennedy's absence on the bench. "We are heartened that you have maintained an active presence in the building," he added, "and we take great comfort that you remain our valued colleague here."

News of Kennedy mulling retirement first surfaced in June 2017. According to The Associated Press, former law clerks said that Kennedy was considering retirement in 2018. Speculation about Kennedy's retirement plans was understandably frequent as the 82-year-old justice has served on the Supreme Court for some three decades.

The Supreme Court letter went on to say about Kennedy, who is originally from Sacramento, California, "No one leaves Sacramento to become a prospector. But your labors since moving east have yielded a treasure of thoughtful decisions. This legacy will guide the understanding of judges, lawyers, and citizens for years to come."

The Supreme Court justices' letter went on to state, "Your example of ceaseless civility inspires us as we go forward with the work of the court that you have so vitally advanced."

The justices mentioned Kennedy's wife, Mary Davis, too. "We wish you and Mary well in your much-deserved retirement," the letter concluded, "and we look forward to many more years in this new chapter of our shared friendships."

In spite of his retirement, people can still expect to see Kennedy in the Supreme Court building. According to The Post, as a former justice, Kennedy will have the right to maintain his judicial chambers. He also has three law clerks under his supervision.

At the announcement of the Supreme Court letter, Kennedy was seen wearing a suit as opposed to a traditional black robe. It looks like the former justice is already smoothly transitioning into retirement life.

In response to his colleagues' letter, Kennedy also shared some words. In his own missive, he said, "This reply is not to say farewell, for it is my hope to linger here to be with all of you in the days and years to come."

"It is necessary, of course," he added, "to say farewell to being on the bench and in the conference room. There, for the past thirty years, it was a high honor to join with our colleagues in seeking how best to define and interpret an idea and a reality — the idea and the reality of the law."

The exchange of cordial words took place well over a week after Roberts defended judicial impartiality against President Trump's attacks. After Trump called judge Tigar Jon an "Obama judge" for weighing against his asylum policy, Robert minced no words.

"We do not have Obama judges or Trump judges, Bush judges or Clinton judges,” Roberts said in a statement. “What we have is an extraordinary group of dedicated judges doing their level best to do equal right to those appearing before them. That independent judiciary is something we should all be thankful for."