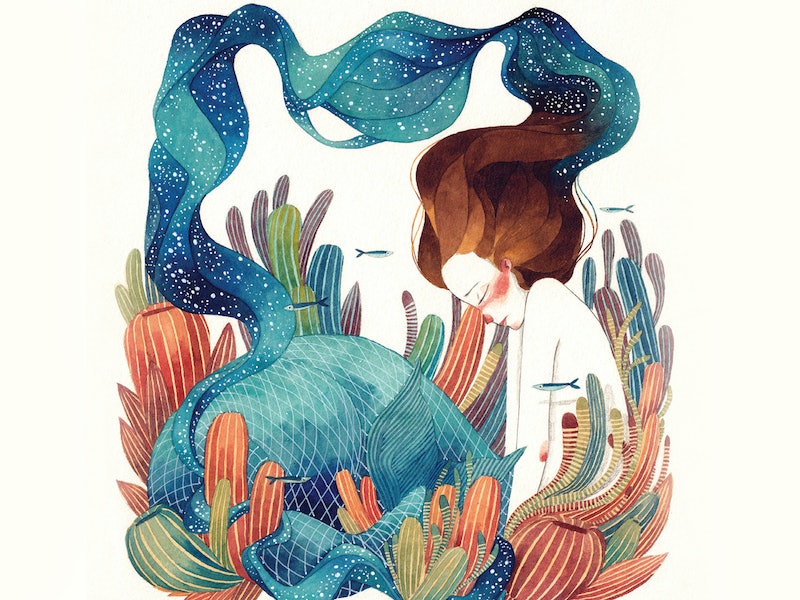 The young woman at the center of Samantha Hunt’s novel, The Seas, (being re-released by Tin House Books on July 10) is one you won’t quickly forget. In fact, she will haunt you. A 19-year-old outcast in a remote fishing town located so far north that the only highway in town runs south, Hunt’s unnamed narrator holds vigil for the father who walked into the sea 11 years ago and never returned, and obsesses over her unconsummated love for a much older, local Iraq War veteran. She works at a sardine factory and as a maid in a motel called The Seas, where every room is named after a famous hurricane. She and her grandfather are writing the world’s largest English-language dictionary and her mother begs her to leave their gloomy, isolated town in pursuit of a bigger, presumably better life.

Oh yeah, and she thinks she’s a mermaid.

“The mermaid myth is bad ideas entering female consciousness through beautiful language and gorgeous images,” Samantha Hunt tells Bustle in an email interview. “The mermaid measures how much we enjoy pain. It is messed up and complex. We create sexual beings with no genitals who kill men. What poignant strangeness. And you can purchase beloved mermaid-monster-men-murderers in any seaside gift shop to decorate your bathroom. I love humans for our dark and weird ways, for the nonsense we make.”

For anyone whose experiences with mermaid lore began and ended with the red-headed Ariel, you might be surprised to discover that the mermaid myth holds a much closer resemblance to, say, Odysseus's sirens than the playful manatees mermaids have been mistaken for. Hunt’s narrator, however, is rewriting that mythology for herself.

“In both the story of Undine and The Little Mermaid the heroine gives up her voice in order to overcome her slimy, fish-like nature,” Hunt says. “She works against the advice of her family and her own desires to become ‘good'... My mermaid rejects all that. She plays with language. If you don’t like the names they call you (slut, crazy, bitch, deserter) then change the meaning of those words. Stories alter the physical world. So do emotions. My mermaid creates the identity she wants by changing the story, making her own language.”

The Seas was Hunt’s debut novel, first published by Picador in 2004. It’s being re-released by Tin House Books on July 10, inviting a whole new generation of feminist fiction lovers into Hunt’s orbit — that is, if they haven’t already discovered her through more recent titles, like her novel Mr. Splitfoot and the story collection The Dark Dark. It’s a novel that — despite earning the writer the National Book Foundation's award for young debut authors — has only ever garnered a cult following, unlike Hunt’s more recent titles. At least, until now.

"If you don’t like the names they call you (slut, crazy, bitch, deserter) then change the meaning of those words. Stories alter the physical world. So do emotions."

“The Seas is still saying the same thing [it said in 2004] but I think more people are willing to listen now,” Hunt says, when I ask her if, given the Me Too and Time’s Up movements, she thinks The Seas will speak to readers differently now than it did when it was first published. “In 2004 the floodgates of fiction let so few oddball feminist writers pass. I’d like it if readers new and old question language and notice which words limit, which words liberate. Language is the best game ever. I have fantasies of crossword puzzling replacing football as American obsession. Imagine the television commentary, the play-by-play whispered into fuzzy microphones as all of America tunes in to watch Heather McHugh solve a really hard Saturday puzzle constructed by Liz Gorski. Yes. That’s my small hope for The Seas.”

"Language is the best game ever. I have fantasies of crossword puzzling replacing football as American obsession."

Not unlike television-broadcast competitive crosswording, the narrator of The Seas seems not of this world — describing visions and experiences that seem to traverse between the divine, the corporeal, and the underworld. At the same time, the narrator is planted firmly in her small-town reality of alcoholism and mental illness, a land where fishermen — particularly the narrator’s father — take to the sea and never return. For this, readers might be tempted to consider her an unreliable narrator; but it’s for all these reasons that Hunt doesn’t see her character that way at all.

“She is unreliable because she is 19? Or because she sees an expanded reality, a rock shaped like King Neptune? To my thinking, someone who incorporates intuition, science, history, and all the books she has read into her interpretation of reality makes for the most reliable narrator,” says Hunt. “Women’s stories are discounted because both women and stories are discounted. My narrator does not broker a difference between the felt and the physical. And nor do I. If I feel it, if I can imagine it, it has a truth. Stories and works of fiction made me into the physical person I am. So my writing considers hateful, narrow ideas of normalcy. Women are often described in terms of disease: pregnancy as illness, hysteria from uterus (hyster), the crazy woman in the attic, etc. My work tries to reseat and reimagine these tropes as the norm, the start, the regular place of authority and acceptance. So, rather than unreliable, I think of my narrator as all-seeing, all-telling. Maybe she’s a bit of a shaman, wounded to let the truth pour out of her wound.”

In the relationship between her narrator and Jude — the central relationship of The Seas — Hunt uses a language of consumption. Her narrator describes wanting to physically consume Jude, often violently, until finally, she actually seems to. She acts as the aggressor in the relationship, subverting the typical male/female dynamics we've come to expect in our storytelling.

“There’s humor in her obsession,” says Hunt. “She’s so lovesick, it’s funny. It’s also not funny at all. I am attempting total honesty — truths that work against the idea of girl as the passive, and pursued. My narrator is the pursuer. In all her powerlessness, she is brimming with lust and doesn’t care.”

It’s an experience Hunt describes as being, at least in part, inspired by her own coming-of-age. “My own experiences of adolescent obsession were painful, shameful and dishonest. I also often felt like I wanted to eat the boys I was pining for. These experiences have become funny in the distance, but by funny, I don’t mean unimportant. The idea of consumption fascinates me because in it there are threads of sex, pregnancy, motherhood, and being haunted by the dead. All the ways we take someone else’s body inside ours. I didn’t know how to think about desire until I wrote her. Now it is so easy for me to see romantic obsession as search for the self, a way to recognize the holes in our bodies, the absences and lacks we carry inside. She is pleased to dwell in her lusty, girly, hole-riddled body. She makes a home there. Perhaps that’s the difference.”

"The idea of consumption fascinates me because in it there are threads of sex, pregnancy, motherhood, and being haunted by the dead. All the ways we take someone else’s body inside ours."

For Hunt’s narrator, sex seems as inextricably linked to violence and death as it does to love and life. In the throes of an obsessive first love, with Jude, the veteran who will not have her, she bares herself naked both physically and emotionally — often convinced that her love is fatal.

“I am interested in extreme acts of truth telling. I am a mother and the beautiful mortification (death is in that word!) of being a mom has left me shameless," Hunt says. "I write stories of bodies from a place beyond shame so that we can stop telling lies and half-truths about girls and lust and women and fear and mental illness and mothers and death. I enjoy the whole big honest mess.”