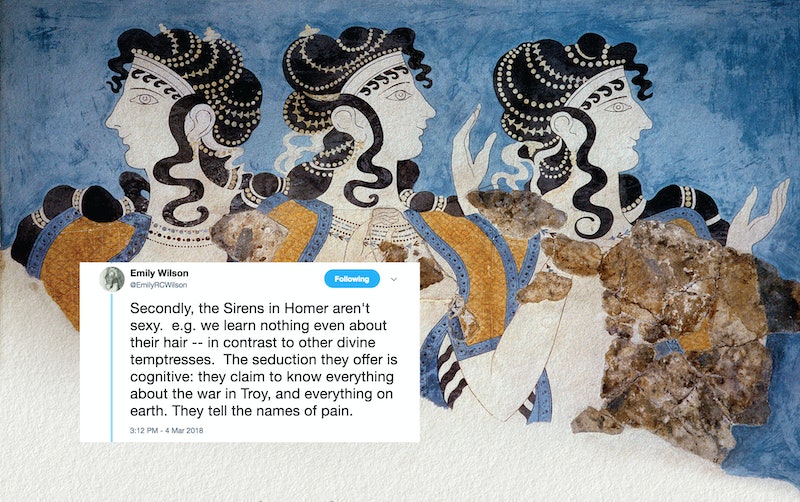 The word "siren" means two things in our modern culture: a loud, wailing, warning sound, like you might find on an ambulance or firetruck, or a sexy lady mermaid who lures sailors to a watery grave. We generally use context clues to tell the two apart. But were the sirens always so sexy? Did Homer really write them as semi-aquatic seductive songstresses in The Odyssey? Or has the story of the sirens gotten just a tad lost in translation?

Of course, myths and legends about sexy monster women are as old as storytelling itself. If monsters represent social anxieties, then our sexy sirens represent the fear that women will use their sexuality outside of the strict roles that have been laid out for them — if women are allowed agency over their bodies, then surely they will take to the sea and start murdering sailors with abandon! Even today, we're fascinated by the sexual appeal of mer-folk, be they re-imagined creatures from the Black Lagoon or a modern take on creepy mermaids like in the new TV show, Siren.

But while perusing the Twitter feed of the brilliant Emily Wilson, the first woman to translate The Odyssey into English, I came across some background on the original sirens and their song (if you're not following Emily Wilson on Twitter for all the hottest takes on the ancient classics, please get right with your life).

The Odyssey by Homer, translated by Emily Wilson, $27.16, Amazon

To begin with, the sirens of Homer's Odyssey are not described as mermaid-like in any way. Most Ancient Greek art depicts sirens as some combination of human and bird, more like harpies than sea nymphs. They live in a flowery meadow and often carry musical instruments. There are even male sirens if you go back far enough. And, as Emily Wilson pointed out in a Twitter thread, the sirens are never described as sexy or desirable in the original text.

Firstly, Wilson points out that the original passage describing the sirens is very short. Modern interpretations have made it a much more central part of the story.

Wilson's own translation is careful to stick to the original text when it comes to the sirens: they are seductive because they know things. They hold terrible, painful secrets. They know everything that happened at Troy, and it is that knowledge that Odysseus is seduced by as his men row him past the sirens' home. Their looks don't enter into it.

In Wilson's Odyssey the sirens still sing a "honeyed song," but it pours forth from their "mouths." In most other modern translations of The Odyssey, all of them authored by men, Wilson notes that this line is translated as "lips." Songs pour from the sirens' lips, even though the original Greek word means "mouth" and not "lip." Lips are more kissable though, and it seems that at some point in telling and retelling The Odyssey, the sirens became all mixed up with the "Alluring Mermaid" archetype.

Plus, lips are less frightening than mouths. Throughout Odysseus' journey, as Wilson points out, the mouths of whirlpools and cyclopses threaten to consume him. The mouths of goddesses and shades speak dangerous truths. Mouths are bad news for Odysseus.

Wilson's sirens do indeed seduce with their minds as much as with their voices. The people who give in to their song "go on their way with greater knowledge." These sirens "know whatever happens anywhere on earth." And more specifically, they "know everything the Greeks and Trojans suffered in Troy."

They offer Odysseus general knowledge, yes, but also self knowledge. They will tell him the objective truth of the war he spent ten years fighting. They are hypnotic, like Kaa the snake, but not especially sexual.

So by all means, enjoy your modern retellings of sexy mermaid lore. Revel in the tales of beautiful sea ladies dragging dopey men to their doom. But remember that the sirens didn't start out as watery femme fatales. They are dangerous because they know things. They know everything. And if you're not careful, you might run your ship on the rocks trying to learn what they know about you.